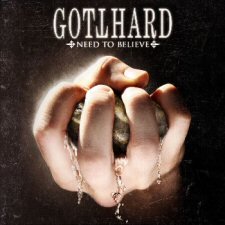 Although worldwide success eluded them for almost a decade, Swiss hard rock act Gotthard finally broke through in a major way with their seventh studio release Lipservice in 2005 (their first release for Nuclear Blast Records after parting ways with B.M.G.).  Since then, their albums (including 2006’s live effort Made in Switzerland and 2007’s Domino Effect) have earned the band huge critical acclaim and well deserved commercial success.

The opening track Shangri-la is a classic slice of middle-eastern influences mixed with the band’s trademark modern hard rock elements. Sounding like a clash of Led Zeppelin and Deep Purple, Shangri-la is a hard hitting opener that once again showcases the song writing talents within Gotthard, and the exceptional talents of Lee out front.

The more guitar driven Unspoken Words sees the band balance their harder edged sound with their melodic and uplifting choruses, while the slower paced first single Need to Believe is a huge sounding anthem that sounds reminiscent of Europe with its huge multi-layered harmonious backing vocals.

The semi-acoustic Unconditional Faith is something a little different from the band, but well placed in the grand scheme of things, while the driving I Don’t Mind and Break Away see the band dish out some heavier efforts with great effect.

No Gotthard album is complete without a huge ballad, and Don’t Let Me Down certainly fits right alongside the band’s former efforts.

From here, Gotthard more than maintain the consistency of the first half of the album, with the crushing Right From Wrong and Rebel Soul, the effortless open groove feel of I Know, You Know and the powerful closer Tears to Cry keeping Need to Believe rocking front start to finish in style.

Most bands that have been around for some time will go through phases where everything they release is pure gold. And while Gotthard have always been a great band, there’s no denying that they’re currently dishing out albums that are nothing short of classic.

As long as Gotthard exist, so does classic hard rock.