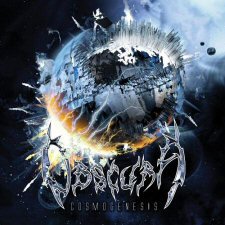 Much like the seemingly endless wave of Gothenburg derivates that was upon us for what seemed to be the longest time, the technical/progressive death metal genre is in full flight with countless bands out there on the circuit all ambidextrously scrambling over each other in an attempt to reach the top of the heap. Munich (Germany) based Obscura (subtle reference there guys) are a relatively new band to the scene after forming in 2002 with Cosmogenesis marking their second full length release.

I’ve covered quite a few technical/progressive death metal releases this year and the vast majority of them have all come with an accompanying swell of adulation from all kinds of people be they on message boards or other reviewers. The thing is that just about every one of these albums has failed to live up to the hype that surrounds it and it is all usually for the exact same reason - that technicality and proficiency comes first, leaving the song writing to come a very distant second. After musing over Cosmogenesis for some time now I’m sorry to report that it too makes that very critical mistake.

None but the most jaded would fault Obscura for their technical prowess because it truly is stunning with Cosmogenesis featuring 50 minutes of extremely tight and impressive playing on the part of each and every member. The stringed instruments in particular show the most obvious signs of virtuosity with the fretless bass of Jeroen Thesseling receiving almost as much of the limelight as the guitar work of Steffen Kummerer and Christian Muenzner. These three share a certain level of chemistry and cohesion that feels like a natural fit if I’ve ever heard one but, sadly, this is where the positive attributes end.

The overwhelming issue with Cosmogenesis is the band’s inability to write a single riff that isn’t bland and completely forgettable. I’m not talking about riffs that are dazzling from a performance perspective, I’m talking about riffs that actually make a mark and stick with you after you’ve heard them. I would estimate that I’ve listened to this album somewhere in the vicinity of a dozen times now and I still can’t remember anything of value from it, even after it’s just finished playing. This is the musical equivalent of fast food - sure, it serves the same basic purpose as the food you’d eat while fine dining and hell, it’s probably even satisfying initially, but you certainly won’t be savouring it.

While technical death metal promises us so much, frustratingly, it rarely manages to deliver. There is a balance that needs to be made between the skills you possess on your instrument and the ability to craft music that appeals to the listener on a personal and emotional level. Until that balance is struck what you produce might as well be considered science - amazing and perhaps even beautiful in its intricacy but ultimately a cold and sterile collection of formulas and equations represented through waveforms.

As always it comes down to a question of personal preference. If jaw dropping technical skill is what you’re after than Cosmogenesis will likely be exactly what you’re looking for but just be aware that that’s all you’re really going to get from this album.