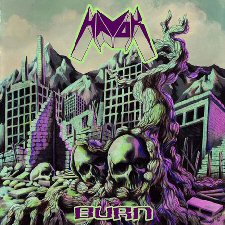 It seems that thrash bands are poppin’ up like flies at a picnic lately. A genre that’s older than some of the movement’s modern day warriors picking up a guitar and moshing out in true ‘80s fashion. We’ve seen Bonded by Blood, Municipal Waste, Evile and Toxic Holocaust, well add to that listed Colorado (U.S.A.) quartet Havok (who are vocalist/guitarist David Sanchez, guitarist Shawn Chavez, bassist Jesse De Los Santos and drummer Ryan Bloom). As much as I love thrash, I’ve found that only a few of the current crop are managing to float to the surface amongst it all. Of course that’ll differ from reviewer to reviewer, but one that does just that for me is these guys.

Once the gentle sounds of instrumental opener Wreckquiem are aside, the album kicks into gear with the Testament flavoured The Root of All Evil. Think along the lines of Testament’s classic 1986 cut, Into the Pit (from The New Order) and you’d be in the ballpark of what to expect here. Path to Nowhere has a Kreator/Coroner kind of vibe to it and it’s pretty clear even this early on that the soul of the rest of the album is 80s thrash through and through. The dry, crisp guitar tone is suited to the quartet’s chosen style with the thrashing Morbid Symmetry continuing to show the band’s love of Testament. Even Sanchez’s vocals have a slight Chuck Billy (Testament) tinge to them which isn’t a bad thing at all. Identity Theft highlights the brilliance of gang vocals which thrash acts loved to use back in the day.

There’s no end of thrashing riffs in The Disease but one could expect nothing less really when listening to a thrash album and the huge ending is just the icing on that cake. Scabs Of Trust is a fairly stock thrash affair whilst Ivory Tower is a tad slower and more dynamic as well and just for a slight change up, the blistering To Hell sees Sanchez’s vocals show a slight Peter Dolving (The Haunted) tone to them at times. The galloping Category of the Dead shines late in the piece as it mixes up a brisk tempo with stomping power chords before Melting The Mountain thrashes from start to end and the appropriately titled Afterburner sees the album wind up in a truly stunning manner.

Look, I’m sure there will be haters saying that this is all done before and the genre is overcrowded and that labels are jumping on the trend bandwagon. But, and my love of thrash aside, it is not an oversaturated genre at this point. I still think that there is a fair degree of diversity within the modern thrash movement, and Havok are definitely showing their take on it. Sure it might not be an extension of thrash, but it’s pretty damned decent and that in itself is enough for me.