Chronicles of the Waking Dream 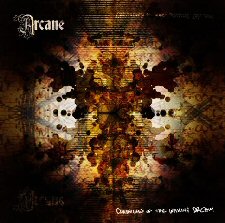 It may not have been quite what you would call a masterpiece, but Ashes, the 2007 debut full-length offering from Brisbane based progressive rock/metal outfit Arcane, certainly hinted at plenty of potential within the band in time to come.

Two years on, and Arcane (who consist of vocalist Jim Grey, guitarist Michael Gagen, bassist Mick Millard, keyboardist Matthew Martin and drummer Blake Coulson) has once again returned with their sophomore effort Chronicles of the Waking Dream. And it has to be said that the band have well and truly delivered on their initial promise.

Much like Ashes, Chronicles of the Waking Dream is not what you would call an album that gives instant gratification to the listener, with the eleven tracks taking time to truly appreciate. But after several listens, it’s clear that Arcane have truly improved their song writing skills in their two years between releases, as well as developing a sound that fits the band’s direction perfectly.

Glimpse is a slow building piece that relies heavily on gentle building drum rhythms, floating piano notes, snippets of sampled spoken word pieces (which only hint at the conceptually based efforts true meaning) and some great vocal melody lines from Grey, before they fully come into the picture with The Seer. Sounding a lot more in synch with one another, The Seer is a twisting mass of heavy atmospherics, equally heavy guitar passages and some truly outstanding vocals from Grey, which combined makes for a more complete sounding effort from the band.

From here, Arcane considerably builds upon the strong start from the album, with the intensely groove driven The Malice, the metallic based Secret (which features some outstanding lead work throughout by Gagen) and the epic Asylum: Acolyte Zero balanced out beautifully with the epic Fading (which is undoubtedly one of the real stand out tracks on the album alongside Asylum: Acolyte Zero), the piano/bass based May 26) and the short interlude piece The Third Silent Year (which features a strangely captivating guest vocal performance from Norwegian vocalist Annette Askvik).

Despite the album’s somewhat cryptic conceptual premise, Chronicles of the Waking Dream is a huge step in the right direction for Arcane, and should appeal to those who enjoy progressive rock a little more left of centre towards the likes of Anathema and Madder Mortem.