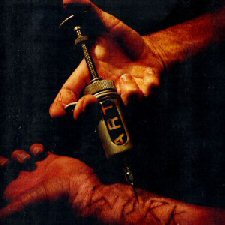 Got hooks? These guys sure do.

Four albums in and Orem, Utah (U.S.A.) quartet The Used (who are vocalist Bert McCracken, guitarist Quinn Allman, bassist Jeph Howard, and new drummer Dan Whitesides) have made some changes. It’s the first without long time drummer Branden Steineckert and their first long player to be recorded without John Feldmann. The band opted to work with Matt Squire (Panic at the Disco, Taking Back Sunday) this time around on an album that the band consciously wanted to be different to their previous output. That it is. It is also a corker of a release to boot!

Artwork has gets off to a flying start as opening cut Blood On My Hands launches with the perfect balance of hard rock aggression and pop sensibility (read: chock full of catchy hooks). It’s the perfect start to the album and certainly sets the tone for what is to come. Empty With You might be all about gentle versus but the chorus has all the power of the opening cut and stands tall early on before the slower Born To Quit offers little until the emo laced chorus kicks in that shows McCracken in fine form. The suitably soppy titled Kissing You Goodbye is as predictable as you’d expect and is right up there as far as massive radio airplay potential goes. Take it or leave it I guess. The atonal aspects of Sold My Soul are as infectious as the chorus and by this stage, The Used’s new direction is strongly routed in their sing-along type choruses.

Almost true to it’s name, Watered Down, can be lumped along side Kissing You Goodbye - gentle, unassuming, sugary sweet. It’s quite the contrast to the anger loaded On the Cross which features a sample from a speech by controversial black American activist Khalid Abdul Muhammad and Come Undone, for some reason, has a Linkin Park like vibe to it at times, musically at least. The up tempo Meant to Die is another star late in the piece but this time, both verse and chorus are equally strong. Best of Me is average at best but it fairs better than the ho-hum finale, Men Are All The Same, which really brings nothing to the table as it reprises Kissing You Goodbye in an unnecessary manner. Perhaps it means something in the lyrical context of the album but I’m not sold on the idea or the song for that matter.

Artwork is a big step in many ways for The Used and for the most part they pulled it off. There’s a couple of stumbles at the very end that leave the album finishing on a sour note for this reviewer, but right up until that point, The Used are clearly onto something. If nothing else, whilst Artwork is a good, strong album, it makes album number five potentially just that bit more interesting.

More from Used, The