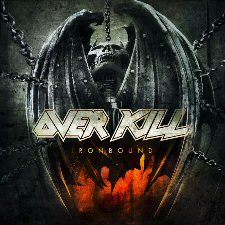 Thrash metal that may fill your small town stadium, but not an arena

While Metallica, Megadeth, Slayer and to a lesser extent Anthrax are UEFA Champions League worthy, Exodus, Testament, Kreator and a few other similar bands are good enough for the Europa League, Overkill have always been like a Premier League middle of the table team - with some traditions, a legion of loyal supporters but no glamour whatsoever.

Even so, the band was one of the few that decided not to give up on thrash metal and continued putting out at least decent production through the years, and that’s why their fans will most likely consider “Ironbound” the best thing to happen all year. This time around though, Overkill have concentrated and made an effort to provide us with an album that may be interesting not only to the hordes of already hooked fans.

A few bass notes tear the silence at the album’s very beginning, becoming the center of 8-minute opener “The Green and Blak” and its epic melody. A thrash metal epic that is led by a bass line? You probably haven’t heard such a thing since “Master of Puppets”. And from here the album just picks up and delivers us crushingly heavy riffs like the ones in the title track, total olschool vibe in “Bring Me the Night”, and an atmosphere of darkness in “The Goal is Your Soul” - superb thrash metal.

The production is one of the disc’s strongest arguments. The guitars sound powerful, yet cutting, the rhythm section crushes like a bulldozer moving at 160 mph, and then Bobby "Blitz" Ellsworth’s vocals rise above the mix in the finest oldschool heavy metal fashion, stating loudly that it is not a good idea to fuck with this band.

“Ironbound” is packed with points that may help Overkill jump over the verdict I gave them at this review’s very beginning. If they are really going to succeed, pardon the cliché, but only time can tell. Still, the new CD is a damn fine reason to see them live on the tours that are bound to follow!