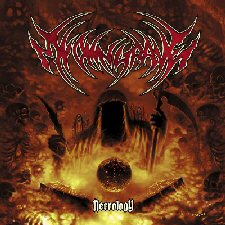 It's Swedish, brutal and devoid of fillers. Death metal to die for

One should never judge a book by its cover, but one look at My Own Grave’s cover for their latest effort Necrology will certainly give you an idea as to not only where they come from, but also what style of music they play.

If you chose Sweden (or even Europe for that matter), you would be correct in guessing exactly where the band hail from. And if you happened to think death metal, then you would be certainly right on the mark.

After two previous releases (2006’s full-length effort Unleash and 2007’s Unholy E.P.), My Own Grave are back with their second full-length effort Necrology, and it has to be said that the band have well and truly taken their sound to the next level.

While elements of a thrash death metal sound still lingered on their last release, My Own Grave have made the transition to a fully fledged brutal death metal act on Necrology, with a sound that’s easily compared to Vital Remains, Krisiun, Grave and Deicide in terms of execution and sheer aggression.

Running for just over the thirty five minute mark, My Own Grave certainly don’t waste the listeners time with any unnecessary extras, with many of the songs averaging around the three and a half minute mark (Aside from the brief opening introductory track Awaiting Death).

While My Own Grave (who comprise of vocalist Mikael Aronsson, guitarists Anders Härén and Stefan Kihlgren, bassist Max Bergman and drummer John Henriksson) aren’t necessarily groundbreaking in terms of their song writing, there’s nothing that falls below expectations throughout Necrology, with tracks such as Bloodline Broken, the fast paced None Shall See, Disciples of War, Exhumed to be Buried and Carnal Revelations (which features samples from the controversial 1982 documentary The Killing of America).

If old school death metal delivered with a modern sheen if something you’re looking for, then keep an eye out for these Swedes. Necrology is seriously brutal stuff.