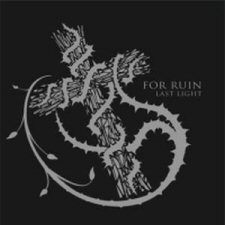 Full of melody and metal

Last Light is For Ruin's 2nd studio album. Released in 2009 this melodic black metal masterpiece demonstrates the Irish band's ability to create harmony and engaging music while still keeping things heavy. There are plenty of solos here and the music is strongly progressive; the only thing that really makes this a black metal album is the way the vocals are done, which is in a mid paced raspy snarl. However, one actually doesn't hear much of that as the album is meant to focus on the music almost entirely.

The album opens up with "Enlightened," which starts off with a few plucked notes before delving into the heavier chords with the bass trudging along with the drums; extremely Opeth-esque. The melody is catchy enough. The second track, "Care of the Dead" sets the pace for the rest of the album: melodic chords that sound at times like something a metalcore band would use, but much more varied and intense. The vocals are snarled (and can be somewhat understood), but, as said before, don't occur that much throughout the album. It makes its appearance every few verses before the music delves into a lengthy solo; this is common throughout the album. Tracks like "In Suffering" are a little quieter than the others... at least for the start. There's even some Amon Amarth influence in the way the guitars sound, but eventually the song takes its own shape and sound.

"Crawl" is about the only 'fast' song on the album; it starts out hard and ends hard. The drumming is especially black metal sounding amongst the chugging guitars. No vocals present though. "Deluge" sets the melodic black metal sound back up; there's a really good bass line in this track that changes things up a bit. The album needs moments like these, even with all its melody, there are points when the listener may ask, "Haven't I heard this same riff or solo before in the track before?" The final track, "Elysium," is the most diverse one on the album, particularly because it is more dragging and doom metal influenced than the melodic blackened metal heard on the last several ones. The bass overshadows everything while the vocals take on an even lower rasp that goes to show that it isn't all monotone. The melody is still there, as are the solos, but it's done at a much slower pace where two guitars can be heard instead of one just screaming out amongst the other instruments while the rest is in the background.

Last Light is definitely a melodic metal metal album that fans of Amon Amarth, Opeth, Children of Bodom, and even Killswitch Engage fans might enjoy. Some may argue there isn't enough vocal work and a lot of the guitar music sounds recycled, but it is still a very decent piece for anyone who enjoys cutting edge, yet not monotonous music.

More from For Ruin