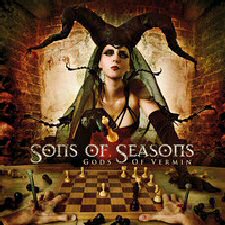 Oliver Palotai, the keyboardist for American melodic power metal band Kamelot and heavy metal band Doro has formed his own progressive symphonic metal band, called Sons of Seasons. The band was formed in early 2007 as an outlet for Palotai to use his many skills in the music world, like producing, composing and of course his talents as being a musician. Palotai, aside from playing keyboards, also plays guitar; and was the guitarist for U.K. metal act Blaze from 2004-2007. He left after a disagreement with the band’s new management, along with the entire band.

Bringing 2 former Blaze members with him, drummer Daniel Schild and guitarist Luca Princiotta, the Sons of Seasons family began growing. Inviting bassist Jürgen Steinmetz, who also plays for Silent Force to the band in mid-2007, there was just one position still vacant. That spot soon went to vocalist Tijs Vanneste; however the band’s future touring plans didn’t quite fit the tight working schedule at Tijs’ job and had to give up being the front man of the band. On a tour in Japan, Palotai met Metalium’s vocalist Henning Basse and was amazed by his live performance. Basse replaced Vanneste and the Sons of Seasons line-up was complete, but only for a short time. Guitarist Luca Princiotta left the band in 2008 and Palotai performed the guitar duties for the CD. Since then the band has enlisted guitarist Pepe Pierez to take over from Princiotta’s vacant position.

The end result, ‘Gods of Vermin’, is a colourful palette; meshing into one Oliver Palotai’s passions for metal, jazz and classical music. With complex yet catchy arrangements, ‘Gods of Vermin’ brings forth a musical discovery, combining the best of symphonic metal with the sophistication of progressive metal. One of the greatest surprises on the album is the performance of power metal vocalist, Henning Basse. In my humble opinion, I consider Basse to be quite an underrated metal vocalist and it’s great to see him take on a different role outside of Metalium. You will be in for a sensational shock, as this is a side of Basse that you have never heard before. Henning has been given free reign on ‘Gods of Vermin’, delivering some of the most passionate, spine-tingling vocals I’ve ever heard exit his lips; showing the metal world just what he is capable of.

Finding similarities from bands such as Demons & Wizards, plus Palotai’s other band, Kamelot, and a few symphonic metal bands like Epica, After Forever, Visions of Atlantis and Edenbridge; Sons of Seasons’ music is quite diverse and challenging, satisfying the metal tastes of many genres. Adding further spice to the mix is the guest vocals of Epica’s Simone Simons, who sings on 2 tracks with Basse (“Fallen Family” and “Wintersmith”). Tracks on ‘Gods of Vermin’ vary constantly, containing heavy aggression, somber and peaceful passages, instrumental sections and plenty of choirs and orchestras, and lastly eerie atmospheric elements. Most certainly and convincingly, Sons of Seasons have reached the upper echelons with this release.

Dark aggression comes in the form of songs like “Dead Man’s Shadows”, “Belial’s Tower” and “Fallen Family”, particularly with Basse’s vocals, but also contains great melody, emotion and precise musicianship from all involved. Other standout tracks include the enchanting “The Piper”, the heavy “Sanatorium Song”, the softer yet mesmerizing “Wheel Of Guilt” and last but not least “A Blind Man’s Resolution”.

Every track on the album has a real epic feel to it, there being so many tempo and structure changes, it almost feels as if you are listening to a grand movie score, laid out in front of you in all its glory. ‘Gods of Vermin’ is an exquisite tantalization to the ears and a release that will appeal to you over and over again with every listen. Oliver Palotai described forming Sons of Season as an outlet for his musical passions – well this is one hell of an outlet and Palotai is nothing short of a genius when it comes to writing, composing and delivering extraordinary metal music. This CD is highly recommended for just about every fan who falls into the power/progressive/symphonic and modern melodic metal genres. Hunt ‘Gods of Vermin’ down, because your ears will thank you.

More from Sons of Seasons