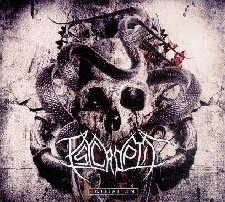 What it may lack in extras, it sure makes up in brutality

It’s not surprising to find that after four critically acclaimed releases to their name, getting signed to the mighty Nuclear Records label for overseas distribution and undertaking several worldwide tours with considerable success, Tasmanian act Psycroptic have finally put together a live release to show why the Australian act is considered one of the finest technical death metal acts in today’s extreme metal scene.

If anything, Initiation shows just how far the four piece act (comprising of vocalist Jason Peppiatt, guitarist Joseph Haley, bassist Cameron Grant and drummer David Haley) have come as a live act over the years, with the band’s headlining full live performance (recorded on December 20th 2008) at Melbourne’s The Hi-Fi Bar nothing short of sheer brutality throughout their entire sixty minute set.

Set list wise, there’s plenty of variation, with the twelves tracks on offer spread throughout the band’s entire back catalogue. In terms of a stage show, Psycroptic opt to keep the theatrics down to a minimum, with the light show used only to shed some light on the band members themselves, and little more. What the band does offer up however is a truly crushing show, with all four members of the band given ample opportunity to showcase their talents through generous close-up’s and plenty of time with the camera shots.

Having now recorded a couple of albums with the band, and spent plenty of time on the road with the guys, Peppiatt’s performance is obviously growing more in confidence, as well as sounding more in synch with the band themselves. Songs worthy of a special mention include the opener A Calculated Effort, Carnival of Vulgarity, Ob(Servant), The Colour of Sleep, Merchants of Deceit and the closer Initiate.

Although a solid performance, and looking the part, I couldn’t help but feel that the absence of crowd noise throughout the show (both on the C.D. and the D.V.D.) left Initiation feeling a little hollow and too clean sounding overall. But if on the other hand you’re not put off by the lack of crowd participation, and wish to see and hear the band in pure live form, then I guess overall, there’s little to fault within Initiation.

In terms of extras on the D.V.D., there are two tracks of live rehearsal studio footage (The Isle of Disenchantment and Alpha Breed), the promotional video clip for Initiate, a thirteen minute run through the band’s equipment set-up’s (grant’s rather epic setup takes a mere twenty seconds to go through!), seven minutes of behind the scenes footage of the band at home in Tasmania (which is interesting, but hardly essential) and a twenty minute documentary (which is essentially footage of the band both on and off the road, which is kind of cool and funny, but again something that will most likely be watched once).

Lavishly packaged in a rather cool and brutally designed/deluxe fold-out digipack, Initiation is a worthy representation of Psycroptic live both in the audio and visual sense, and a release that will definitely tide fans over until the next highly acclaimed assault from the guys is finally unleashed upon the world.