The Wicked Symphony/Angel of Babylon 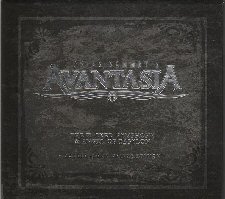 Avantasia, the solo project of Tobi Sammet from Germany's favourite power metallers Edguy. This act has had a longer life than what was once expected, and what was supposed to finish at 2 albums has now become 5 releases and an EP with contemporary Arjen Lucassen and his act Ayreon. Avantasia has consistently delivered high quality metal releases that appeal to the prog/power metal fans among us, whilst remaining poppy and catchy enough to enjoy mainstream attention. This isn't to get sales, but this is all part of the grand design of Tobi Sammet, who has honed his craft to absolute perfection on these two releases. It's impossible to judge them separately; they are two parts to a divine whole that delivers from start to finish. It's all killer, no filler.

The Wicked Symphony is the first album of this two part release, and begins with perhaps the highlight and strongest song of all the tracks on both albums, the title track 'The Wicked Symphony'. Clocking in at over nine minutes, it is from start to finish a power/prog epic. Featuring not only the voice of Tobi Sammet himself, but the voices of legends Russel Allen from prog masters Symphony X and Jorn Lande from his own project Jorn. All three voices are strong, competing with each other for prominence in the song and it works majestically throughout. The song also has the best damn chorus I have heard in a long time, and I can't help but tap my foot and sing a long to it when it comes on, even if my girlfriend starts giggling at me. Whilst Jorn and Russel sing on every other track on the two releases, there are other vocalists that lend their talents throughout. Heavy metal Pariah Michael Kiske lends his voice box to tracks like 'Wastelands' and 'Runaway Train' whilst the perennial second runner and ex-Iced Earth/Judas Priest vocalist Tim 'Ripper' Owens stands on his own two feet on 'Scales of Justice', which is great to hear, his vocals are absolutely ferocious when he isn't trying to sound like Rob Halford.

Angel of Babylon continues the strength of The Wicked Symphony. The opening track 'Stargazers' is just as epic and strong as 'The Wicked Symphony', thought without as catchy a chorus to get lost in. Perhaps the standout track on this album is 'Death is Just a Feeling' which sees the prolific Jon Oliva taking up the mic and lending his unique, gravelly voice to lead the song. His voice is a hit/miss with most people, but it works incredibly well with this inspirational mid-paced mover. The chorus gets me every time, sending chills up my spine. For those of us wanting to hear Tobi at his vocal best, there's the symphonic ballad 'Blowing out the Flame', sounding very much akin to 'The Spirit Will Remain' from Edguy's album Hellfire Club. Tobi's vocals are strong, and they always have been, this sorrowful track just goes to show how much stronger he's become in his already longstanding career. There's no fault I can find here, the song is majestic and inspirational, a standout track in a release of all diamonds and no rough. But this would all be worth nothing without something strong, to end this double release and close the trilogy that began with The Scarecrow. 'Journey to Arcadia' is strong, happy, yet at the same time something sad, it's a departure, the closing of the curtains, the end of the story. You don't want it to end, but unfortunately it does, its' great to hear, and I'd love this album to never finish, but it does.

Fortunately, when it does end, I can always flick all the way back to 'The Wicked Symphony' and begin the journey again. So you're not a fan of power metal or prog? Big deal, these are worth at least a listen and if they're too fruity for your tastes, don't waste your energy with them. However, I think there's something to gain here. Here you have two fantastic examples of absolutely refined and perfected song writing, the roles are played perfectly, the actors have rehearsed their roles to an art and it's something that's worth seeing from start to finish.