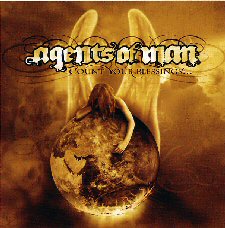 It's been four long years since New Jersey based quintet Agents of Man released their debut mini album, AOM EP 01. Their heritage comes from the likes of acclaimed hardcore acts such as Bulldoze, One 4 One and Train of Thought. More recently, Sworn Enemy can be added to that list with the recruitment of bassist Mike Couls. Agents of Man returned to Purple Light Studios once again to work with Mike Barilie (Candiria, 40 Below Summer) for their overdue long player which is also their first for Century Media records.

The cliched effects laden intro to Death of Me rings alarm bells in my mind. In all fairness, I refuse to pass judgement at this point in time. With the songs slightly hard edged verse and melodic chorus in full swing, it's even harder to ignore those warning signs. By the time No Tomorrow and Blood Money continue this trend, there's no avoiding these warning bells any longer. Agents of Man seem to be full of nu-metal ideas and riffs that offer up very little originality for a market that was already over saturated at the point of its downturn a couple of years ago. It's not all bad news for this release with Repercussion hammering out some toughened East Coast hardcore like riffs backed with some nice gang vocals which continues in Without A Trace. Sadly though, the good work is undone during this track with a forced push for melody which has been prominent to the point of almost formulaic with each track so far with the only exception being Repercussion.

Can't Run Away offers no opposition to the above criticisms. The title track has an almost Candiria like vibe to it which is by no means a bad thing as its one of the strongest tracks on the album. Then again, that's not necessarily saying much in the context of the other songs on Count Your Blessings. Deep Inside starts off with some promise but it's another write off when the second half of the track kicks in. Murder moves along with an attitude that its title would imply by mixing up more of those hardcore and Candiria like influences. The acoustic ballade Bricks That Build A Castle is the definition of a token ballad and it's of no surprise on this album. Consequences has a touch of the attitude along the lines of Murder and Count Your Blessings as does the closing track Headless from time to time.

It would be unfair to label Agents of Man wholly a nu-metal act. While they do fish in that pond quite a bit, tracks like Repercussion, Count Your Blessings and Murder show that they can do so much more. Count Your Blessings is fairly generic but a couple of shining strong moments hint that with some refinement and general movement away from those nu-metal elements, Agents of Man could move toward standing out from the pack.