IX & I: The Quintessence of Algaresh 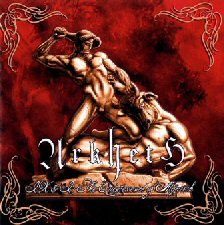 Making up for their time away from the scene

Forming out of the ashes of Eternal Dark (who parted ways in 2002), Arkheth wasted little time marking their mark on the scene, with the band signing up with Blacktalon Media in late 2003, followed closely by their debut effort Hymns Of A Howling Wind in early 2004.

But despite the band’s quick formation and the release of their first album, little has been heard from Arkheth apart from the rare live performance.

That is until now. After a lengthy six year gap between releases, Arkheth (who currently comprise vocalist, keyboardist and drummer Tyraenos, guitarist and keyboardist Skolthorn and bassist Muurqe) has finally returned with their second full-length effort IX & I: The Quintessence of Algaresh.

Seemingly wanting to make up for lost time, the black metal act has decided to release a double album this time around, with IX & I: The Quintessence Of Algaresh boasting almost two hours of new material. But while there’s no denying that Arkheth are definitely providing plenty of value for money, it has to be said that sometimes less is more.

Opening up with the instrumental piece The Conception and Creation, it’s immediately clear that production values this time around have certainly come a long way since the days of Hymns of a Howling Wind. The band no longer sounds so raw and unrefined. Instead, the music sounds bigger and more expansive than ever, with the grim edge of the band’s primitive sound given a symphonic overhaul.

The follow up track Chronicles of the Ancient Narwynd is every bit as impressive as the introduction had me believing the album would sound. The band’s tried and true black metal song writing formula may not have changed too much from last time around, but the song does at least demonstrate a bit more variation with its shift in tempos and addition of different instrumentation, which makes it just that much more interesting than anything from Hymns of a Howling Wind. But if there’s a problem with the song, it’s that at over thirteen minutes, it does come across as a little too stretched out and repetitive after a while.

And it’s that very problem that brings down IX & I: The Quintessence of Algaresh. Although there’s some really strong songs dotted throughout the ten tracks on offer (in particular The Breeze that Stirs the Snow, Faint Whisps in the Heart of Orion, Where the Wind Blows Ether and the stripped back Black Riders of Avernus), the attention span tends to waver around the latter part of the second disc.