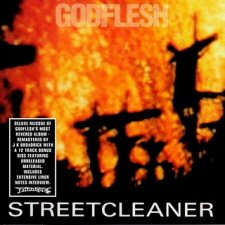 The best just got better!

Godflesh were one of the true pioneers of industrial metal. For many, this reviewer included, the mighty Streetcleaner was the first introduction to this legendary act, fronted by one time Napalm Death vocalist Justin Broadrick. Along with long time partner G. C. Green and a drum machine of some description, the group forever changed the landscape of metal over the course of their fourteen year career. Fostering label Earache Records have given the band’s official debut album Streetcleaner the deluxe treatment with new liner notes, a fold out cover and a second disc chock full of goodies, all of which have been overseen by Broadrick personally.

The first disc is still as it always was, albeit remastered by the band’s mastermind him, one J. K. Broadrick. Like Rats is as crushing as ever and the title track still as sinister as before. Of course, in amongst those highlights is the brilliant one-two punch of Christbait Rising followed by Pulp. Whilst the album is amazing through and through and really doesn’t need a full recap here, special mention must be made to Devastator/Mighty Trust Krusher, Locust Furnace and the early version of Wound which certainly standout still to this day.

The real meat and potatoes for fans will be the second disc which is full of demos, rare unreleased mixes and a couple of live tracks as well. The first five tracks on disc two are unreleased original mixes of the first five tracks on the album (Like Rats, Christbait Rising, Pulp, Dream Long Dead and Head Dirt. Cleaned up from the original cassette source, Broadrick recalls in the liner notes that although they weren’t initially happy with these mixes, he really can’t recall why they were abandoned in hindsight and that after being cleaned up, he is really happy with them. The differences are obvious and I’m torn as to which I prefer personally. You be the judge. We’re treated with a couple of live tracks (Streetcleaner and Head Dirt) from Geneva, Switzerland in 1990 that sound as chaotic as you would expect from Godflesh live. JKB delves into the pre-studio rehearsal tapes from 1989 to treat us with unreleased and very rough and raw versions of Pulp (clocking in at over 12 minutes!), Dream Long Dead and Christbait Rising. They sound very subpar but die hard fans will love the deeper look into the mind of Broadrick these songs give. The two 1988 demos of Deadhead and Suction featuring only Broadrick and a drum machine are much clearer in comparison.

Put all of this together in a multi panel digipak that features some 3 pages of extensive and intense liner notes, and this is one hell of a release for Godflesh fans everywhere. Sure you’ve heard Streetcleaner many times by now, but you’ve never heard it like this.