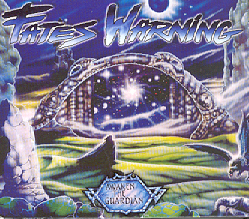 When Connecticut (U.S.) based Fates Warning released their debut full-length album Night On Bröcken in 1984, it managed to attract some a small amount of attention. But it wasn't long before their follow up, 1985's The Spectre Within, gathered a much larger following as the band themselves really started to branch out beyond the traditional heavy metal sound (In particular, Iron Maiden and N.W.O.B.H.M. in general), and in the process developed an entirely new style. It was one that later became known as progressive metal. Although The Spectre Within was well received, it wasn't until Fates Warning's third release, 1986's Awaken The Guardian (With the recording line up of vocalist John Arch, guitarists Jim Matheos and Frank “X” Aresti, bassist Joe DiBiase and drummer Steve Zimmerman), that the band really established themselves within the metal scene. And while it took a little longer, in time Awaken The Guardian was hailed as a classic that went on to influence countless others within the progressive metal scene.

Almost twenty years on from original release, Metal Blade Records have decided to celebrate and honour the impact Awaken The Guardian has had over the years in a deluxe expanded edition (Amounting to no less than two C.D.'s and a D.V.D.).

As you would expect, the first disc in this lavish production is the original album in full remastered glory. Although Awaken The Guardian was not the most professional sound recordings (Not unlike the two previous albums, Awaken The Guardian was very much recorded on a limited budget), the remastering (By Brad Vance) has managed to remove a lot of the hiss contained on the original pressings of the album, as well as thickening up the overall sound (Without losing any of the original feel of the album). Of course, in regards to the album itself, it's hard to fault any of the tracks themselves, with everything from the progressive Black Sabbath feel of The Sorceress, right through to the lengthy closer Exodus all standing the test of time from a both the musicians and song writing point of view (A credit to both Arch and Matheos in both respects).

The second disc (Compiled by Matheos) is an interesting insight to the early versions of The Sorceress, Valley Of The Dolls and Prelude To Ruin in demo form. And while the recording are rough and of inferior in quality in some parts, it's interesting to hear Arch working his way through the melody lines, which in some cases the songs are quite different (Dare I say more confident sounding) on the finished album. The remaining six tracks on the second disc comprise of live tracks, which include Fata Morgana, The Sorceress, Guardian, The Apparition (From The Spectre Within), Damnation (From Night On Bröcken) and the live favourite, a cover of Black Sabbath's Die Young. Although where this live recording was actually recorded isn't actually noted in the credits, it's again as good as can be expected (Considering it's age and the limited technology available to the band at the time).

The real surprise (Not to mention real bonus) surrounding this whole expanded edition however is the third and final disc, the D.V.D. If the second disc wasn't enough to get you excited, then the D.V.D. certainly will.

Captured live at Sundance (On Long Island) in late December 1986 (Mere months after the albums release) on a hand held camera, Fates Warning perform an amazing set boasting twelve tracks. Once again, the quality isn't the best (In particular the sound, which goes from loud to soft depending on the number of instruments being played at any one time), but the fact that footage of the Arch led line up of Fates Warning actually exists in the first place is something of a miracle in itself. Of the set list itself, there's little to fault here once again as the band run through two tracks from Night On Bröcken (Kiss Of Death and Damnation), four from The Spectre Within (Pirates Of The Underground, Orphan Gypsy, Traveler In Time and The Apparition), five from Awaken The Guardian (Valley Of The Dolls, Fata Morgana, The Sorceress, Guardian and Prelude To Ruin) and the obligatory Black Sabbath cover Die Young.

Throughout the show, Arch proves that his vocals aren't just the work of studio trickery (Everything produced on the albums is actually reproduced live), while the band (In particular Matheos and Aresti) is in excellent form. Overall, everything from the packaging, through to the liner notes on the D.V.D. (Written by Dream Theater's drummer Mike Portnoy) and the cardboard slip binding the three disc together shows the careful attention to detail Metal Blade Records have paid to this largely overlooked underground classic.

Sadly, this was also the last album to feature Arch as vocalist, and from 1987 onwards (When Ray Alder took over the front man position, making his debut on 1988's No Exit), Fates Warning soon changed direction once again (And continued to do so with every ensuing release). While the debate still continues as to whether Fates Warning are still producing albums that compare to their formative years (A question that echoes the same asked in regards to fellow progressive rock acts QueensrÃ¿che, Dream Theater and Rush), there's one point that most fans will agree on, and that's Awaken The Guardian is an undisputed classic, and with the new expanded/remastered edition from Metal Blade Records, a must have for fans of classic genre defining progressive rock.