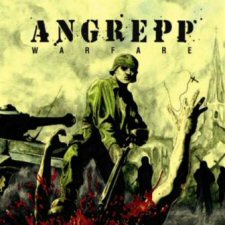 There may be a few misfires, but the album does enough damage

With only a demo to their name (2006’s Prepare for the Attack, which was later re-released in 2007 through Maltkross Productions), Swedish (Stockholm based) act have managed to sign up with Abyss Records for their debut full-length effort Warfare.

With a name like Angrepp (which is Swedish for assault), an album titled Warfare, and the said album’s imagery depicting a soldier blasting away another soldier during combat, its fair to say that Angrepp’s thematic premise is solely based on unhinged aggression. And for the most part, that assumption is true, as there’s plenty of unbridled anger to be heard throughout Warfare. But while there’s no denying the fury that fuels Angrepp, it’s also hard to ignore the sheer fun within the ten tracks that make up the hellish Warfare.

After a brief sound effects introductory piece (Intro, which mixes sounds of gunfire, war, bells and orchestrated keyboards, all of which builds towards a blasting climax), the five-piece act (comprising vocalist Adrian Lawson, guitarists Dawid Dahl and Karl Olsson, bassist Andreas Fröberg and drummer Fredrik Widigs) get the album off to a speedy and brutal start with Five Horned Formation. The production (the mixing and mastering was handled by Dan Swanö) is clean enough to hear the musical aspect of the song itself, but gritty enough to allow the rawness of the band’s aggressive blackened thrash vibe to really come through the mix. Vocally, Lawson’s decipherable growled singing is full of venom, and is a perfect match to the band’s equally driven motivation to destroy everything that stands within their path.

Legions Arise, the title track Warfare and Dead and Destroyed reveal a bit more of a punk rock influence in amongst the band’s previously established blackened thrash sound (especially with the drum patterns), while shades of Swedish death ‘n’ roll can be detected within Fiende, the schizophrenic Rape, Kill, Rock N Roll (which is definitely one of the more varied and stand out tracks from the album) and Firebrand.

Towards the tail end of the album, For Now I Have Risen (the only song to be resurrected from their Prepare for the Attack demo) and the faster paced Dictator sees the band return full circle, with the thrashier side of their sound returning in full force.

While the album isn’t without its flaws (some of the songs are a little on the long side of things, and therefore have their moments of inconsistencies), and Angrepp do seem a little confused about what sort of direction they want to go musically. Overall Warfare is a mostly solid blackened thrash release, and an album with enough twists and turns from the norm to keep things interesting throughout its duration.