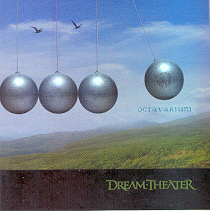 Everything you could ever want

There was a time when you knew exactly what progressive rock act Dream Theater were going to emerge with from album to album. But that all changed with the release of their fifth full-length release Metropolis Pt. 2: Scenes From A Memory in 1999. Since then, every release from the New York based five piece act (Consisting of vocalist James LaBrie, guitarist John Petrucci, bassist John Myung, keyboardist Jordan Rudess and drummer/percussionist Mike Portnoy) has been a complete turn around in sound and style from it's predecessor in an attempt to keep things interesting (Both for the band and the fans themselves), and to keep them from treading familiar ground time and time again (A common fault amongst progressive acts).

So it comes as no surprise to find that after the very metallic and heavy Train Of Thought from 2003, Dream Theater would return with another shift in direction, and that's exactly what they've done with their eighth full-length release Octavarium (Hence the rather unique title and the associated artwork from Hugh Syme). The album begins with a certain amount of familiarity as The Root Of All Evil is a continuation of the Portnoy penned lyrical themes based around A.A. (Which began with The Glass Prison on 2002's Six Degrees Of Inner Turbulence and This Dying Soul on Train Of Thought), with a variety of borrowed riffs, ideas and structures from the previous songs. But unlike the previous two, there's a certain amount of restraint that ensures there's plenty of melodic accessibility this time around, but heavy enough (Especially with Petrucci's guitar work) to bridge Train Of Thought through to Octavarium, and give the album a solid starting point.

Always one to throw the cat amongst the pigeons (Fans in other words), the follow up track The Answer Lies Within moves straight into ballad territory, and with a little help from a string quartet, the song allows LaBrie to really show the maturity his voice has attained in recent years. Having said that, the songs placing on the album (A ballad so soon into the track listing) is perhaps a little questionable. While not entirely a ballad, the subdued These Walls is another slower track that emphasises the song writing ability of the band outside of the over the top progressive style commonly associated with them in recent years (It also shows incredible restraint from Rudess in particular for not over playing the moment), while I Walk Beside You could easily be a throw back to days of 1992's Images And Words with it's overtly commercial appeal and strong sing along chorus.

While the general direction of the last (Slower) three tracks will no doubt have some fans questioning Dream Theater's current direction, the rapid fire attack of Panic Attack soon returns the progressive flavour back into the album, and is primarily a track that could have easily fitted on Train Of Thought with it's overall heaviness. Although hinted in part on the previous track, Never Enough (Which, like As I Am on Train Of Thought, is directed at overly fickle fans) is unashamedly influenced by Muse in more ways than one (Meaning in both the musical and vocal sense), but still maintains the core heavy Dream Theater sound at it's heart. The first track to feature orchestration to it's full extent is Sacrificed Sons (Which could easily be seen as the unofficial sequel to the 9/11 inspired track In The Name Of God lyrically), and at ten minutes long, it sees the band stretch out the more progressive side of their musical capabilities (Especially Rudess and the often 'missed in the mix' Myung) than a lot of the material on the album.

And then there's the final, and title track Octavarium. This track alone will no doubt gather the most attention from fans, and it's with good reason. Not unlike 1995's A Change Of Seasons (In the way it's put together, not sound wise), Octavarium stretches for twenty-four minutes in total (Spread over five chapters), and is another Dream Theater classic in the true progressive sense. The opening four minutes could well have been lifted from Pink Floyd's Wish You Were Here album, followed by a lengthy ballad like section (Someone Like Him). The rest of the band soon pick up mid way through for Medicate (Awakening) before really dipping into '70's progressive era Genesis in Full Circle (In which Portnoy name checks his favourite progressive songs and bands). The second last movement Intervals revisits moments that resemble Six Degrees Of Inner Turbulence while progressively gets darker and angrier (With some shattering screaming from LaBrie in the closing moments), while the finale Razor's Edge brings back the orchestration in a slow breakdown in true soundtrack style.

In a way, the best way to describe the sound that lies on Octavarium is somewhere between Images And Words, Six Degrees Of Inner Turbulence and Train Of Thought, but all the while Dream Theater have forged ahead in a new direction in places. Octavarium is diverse, melodic and hard hitting all at the same time, and while it's worthiness lies purely in the eye of the behold, I can safely say that if you're a Dream Theater fan of the albums mentioned above, you'll more than likely find Octavarium something close to the what you personally consider is the best Dream Theater album to date.