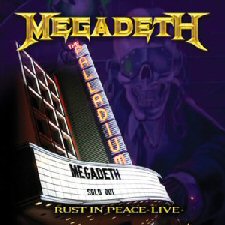 The only thing rusty about this is the presentation itself

It’s not uncommon these days for bands to perform classic albums live as a part of their set. Metallica have done it, Slayer have done it and now Megadeth have done it too. Whilst their current line-up only consists of original members Dave Mustaine (vocals/guitars) and Dave “Junior” Ellefson (bass), the band (who also consist of guitarist Chris Broderick and drummer Shawn Drover) celebrated the 20th anniversary of their seminal album, Rust In Peace, by giving fans the entire album live as a part of a run of dates in the U.S. in early 2010. Mustaine and Co. thought it apt to capture the last date of that run to release it on DVD (and CD) until the more that appropriate title, Rust in Peace – Live.

I’ve seen Megadeth many times and whilst their performance can vary, there’s no denying Mustaine’s ability to assemble an insanely strong band and with long time bassist and cohort Ellefson back in the fold after many years, the band’s execution of this classic album is absolutely flawless. From the opening run of Holy Wars… The Punishment Due through to crushing Hangar 18, the brutal Take No Prisoners, and the crushing assault of Five Magics, Poison Was the Cure, Lucretia and Tornado of Souls, the band deliver a stunning performance. Dawn Patrol was always going to be interesting live as it’s just bass and drums and spoken word, and it’s done as one would expect – maybe, it would have been better to have Mustaine on stage delivering the words but nonetheless, it works. The finale, Rust in Peace…Polaris and a blistering reprise of Holy Wars…The Punishment Due truly shows the band in top form. It’s a little disappointing that we don’t have the option to view the full show and the Rust in Peace segment, as the likes of Skin O’ My Teeth, In My Darkest Hour, She-Wolf, Trust, Symphony of Destruction and Peace Sells…But Who’s Buying? are shafted as “Bonus Performances” here. The eight minute behind the scenes segment has little to add with the only highlight being the band’s rehearsal of Tornado of Souls. The accompanying CD simply covers all of the songs on the DVD.

So whilst I take issue with some of the basics of how the user can see the performance captured here, the biggest issue I have is the quality of the video itself. Audio wise, the Dolby Digital and DTS soundtracks are killer. But visually, I almost think I’d rather see it on VHS than watch this often lo-res DVD version. The cameras cover the show reasonably well but for whatever reason, the resolution seems jaggy for the most part and overall it’s a disappointment because these kinds of artefacts should not be an issue at all these days.

Rust in Peace … Live is a fantastic idea executed with total precision presented very ordinarily, at least visually. Sounds great, looks average. Fans of the album should love this but just don’t expect it to be of the standard we should expect of any live release these days.