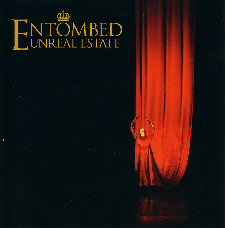 Entombed have been around a long while, even more so if you include their formative years as Nihilist. From their influential days as a prominent part of the early Swedish death metal scene to their just as highly praised more recent death 'n' roll approach to metal, the quintet attempted a bold move by playing live while surrounded by more than 30 ballet dancers performing to special pre-arranged songs at Stockholm's Royal Opera Hall.

A piano intro track is the last thing you'd expect at an Entombed show but this is no typical Entombed performance. The subdued opener DCLXVI/Intermission seamlessly flows into the rocking Chief Rebel Angel which shows Entombed in full flight. The mix is as true to capturing the essence of Entombed live as you could ever want. Say It In Slugs emerges from the murky depths of Jörgen Sandström's bass and becomes a towering form of aggression as the pace picks up towards the end. It's hard to visualise what the ballet dancers are actually up to at this point, and that's probably the only real down side to this album. It's a great sounding live album but I'm not sure just yet if it manages to reflect the uniqueness of this performance. It Is Later Than You Think segues into the plodding Returning To Madness which then quickly slips effortlessly into the practically unaltered Mental Twin.

Night Of The Vampire still retains the heaviness it has always had but it's a little odd simply hearing clapping at the end of it and not the typical kind of response of cheering and yelling you come to expect at a proper metal gig. But then again, as I'd said before, this isn't your normal everyday metal gig. The title track is nothing special as it is simply the outro to Night Of The Vampire played at full pace. In The Flesh is somewhat re-arranged and drops easily into the more up tempo Something Out Of Nothing which delicately transitions into the memorable outro to Left Hand Path which ends the performance.

There's no arguing that the sound on Unreal Estate truly captures Entombed live in what is one of the most unique and courageous moves for a metal band in choosing to combine with ballet dancers no less. It must be said that the track list is definitely not a typical Entombed set but this is not your typical Entombed gig. While the arrangements and the performance itself are excellent, the one thing that the CD lacks is the visual aspect that gives a truer representation of how this seminal metal band has pulled this off. Unreal Estate is an excellent (all be it different) live album, but a DVD of the same performance would be so much better.