Blood of the Nations 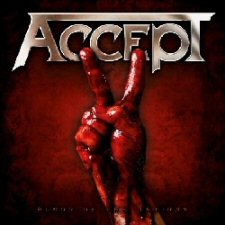 Accept began their music career in the late 70s, and since then have never really stopped. And people thought that Metallica was old and kicking! Even though Accept's last album was released in 1998, and it was a live album at that (their last 'studio' album came out in 1996), they still kept fans entertained for years after with numerous EPs and compilation albums. Most of this delay was due to one of their vocalist's saying that it was his end of the line, and the band was quickly in search for a new one because many of the original members wanted to keep the band together. They found that saving grace in 2009 with Mark Tornillo, who suits Accept's heavy metal style perfectly with a bit of classic rock influence. As the years have gone by, Accept has refused to succumb to any pressures to change their style. Almost forty years later, they still know how to create extreme metal that is more about melody and well placed riffs than just blazing speed and adrenaline fueled vocals.

Blood of the Nation conveys itself as a heavy metal anthem album and rightfully so. Accept take the best of original heavy metal from legends like Dio and combine it with a touch of AC/DC and Slayer tinged thrash to deliver something that is greatly enjoyable. Although Tornillo's vocals sound more along the AC/DC lines with his raw power, but also can touch the softer side too. Don't expect too much softness from this album as it is completely guitar and drum driven; each track features clean production that doesn't contrast with that old-school rhythm that made 80s heavy metal so enjoyable. There are catchy tracks such as "Beat the Bastards" and "Blood of the Nations" that really create an atmosphere from the guitar solos. Then there's the more steady, groove based tracks that focus on rhythms, like "Abyss," which varies in tempo throughout the music to rise and fall, keeping things dynamic.

Also expect a lot of hard rock n' roll tinged music as far as lyrics and rhythm go with tracks such as "Teutonic Terror" and "Rolling Thunder." The guitars still know how to be aggressive right along with the vocals, but don't use the same riffs over and over to sell catchiness or the 'trend of the year.' Sure, there's a lot of the same style used throughout the album, but none of the tracks are repeated. There's even a 'metal ballad' on here that trolls along and shows the more emotional side of the band with "Kill the Pain," but it is by no means not considered in the vein of heavy metal. While some artists tend to use acoustic guitars or pianos for these ballads, Accept continue to use their guitars and drums in full force, but toned down just a bit so the haunting melody, combined with the lyrics, provides a very solid track that has an even bigger impact than the hardest track on the album (which would be "Pandemic" for its speed).

It is amazing to see bands as old as Accept who are still keeping things together. Even though the line-up has gone through so many changes since the band began, there is always one or two original members who know how to keep things together and keep searching out for the right members. As long as there's inspiration and creativity, the music will flow. Former Accept fans will certainly not be disappointed because the band has not changed a bit. Everything that made them so irresistible in the 80s and 90s is still there, whether it be the heavy metal vibe, the catchy rhythms, or down and dirty vocals. New fans who like heavy metal in general- just basic guitars, drums, and singing- will take Accept into their hearts instantly. Blood of the Nations brings something that metal has long been missing: sounds of origin.