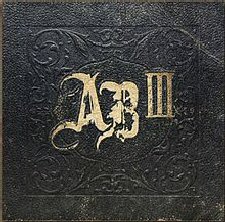 Altering assumptions, and building a bridge

Creed would have to be one of the most generic, paint by numbers and unworthy rock bands in the history of the art form. And since there’s a strong connection between that washed up ensemble and Alter Bridge, I was under the impression that the latter would produce work of a similarly bland quality. But within a few seconds of their new album’s opener, Slip to the Void, bursting out of the speakers, this preconception was pretty strongly quashed.

Punchy second track Isolation keeps the momentum going very nicely indeed too. Pleasantly surprised thus far. Would the quality drop away after such a muscular opening? This was the question niggling at me at this point. But again, I was happily surprised. There is a far superior song craft and sense of dynamics on display here than was ever present in Brian Marshall and Scott Phillips’ former band, and outside one pretty poxy ballad (Wonderful Life, which actually sounds a little like Creed.), Alter Bridge is far gutsier and more ‘alternative’ sounding. Plus in Myles Kennedy they have a singer with greater range and a voice that’s way easier on the ear than the comparatively monotone Scott Stapp. It’s easy to see why Slash chose him as the main vocalist for his solo band.

If I can be picky for one brief moment, a mention must be made of the mixing/production, which sees an already fairly weak drum sound buried even further behind a wall of guitars. It’s a disappointing oversight which detracts slightly from the power of the record.

Most non-drummers won’t pick up on this however, and overall this is a very satisfying album that, given the history, could have been yet another tame and flavourless American rock record. If you hate Creed, and are expecting something in a similar ballpark, prepare to be pleasantly taken aback by AB III.