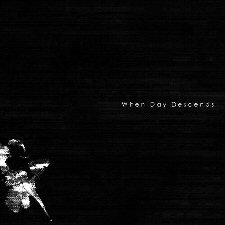 Excellent progressive rock that is more than worth one's time

Epic. That's the way to describe When Day Descends' self titled album. It took five years since their debut in 2005, but the wait was well worth it. Consider them a nicer mix of The Ocean and Between the Buried and Me; channelling the chaotic side of the music through the instruments for the most part while using the vocals to convey some of the softness. The best thing about this album is that it is never repetitive. The chords are always changing along with the tempos. Sometimes it is just haunting or jazzy instrumentals and then the vocals will join in for a few minutes before fading back out. They're slightly nasally, but not untrained or poor by any means at all. Just try listening to the opening track "New Bell". The guitars crash with distortion and the energy of a doom metal band, and then suddenly break into these soft string pickings while the vocals croon along. No drums, no bass... just the guitars and vocals. It is very beautiful to hear.

"A Fragile Disguise" is a great example of how the band merges chaotic with a clean sound. Everything can be heard, even with the distortion, but that crashing energy is still there, especially near the end during the solo. The vocals aren't as present in this song, but when they do show they don't take away from the music at all. In fact, some fans may consider them sorely missed, especially when it comes to "When Trees Die Alone", the only 'true instrumental' on this album. It starts out heavy but then breaks into a very sombre interlude before resorting back to the heaviness; overall a fantastically progressive piece that any post or prog veteran would be proud of. "White Feathers" makes more use of the vocals again and also showcases some of When Day Descends' more jazzy moments with the guitars and the drums, which make more use of cymbals than anything else as opposed to the usual rhythmic pounding. Leave it to the swirling and energetic "Comrade" with its slightly whiny guitars to close the album and one has themselves a fine album.

Every track is lengthy; over ten minutes, so that is why fans - new or old - will certainly not feel cheated out of this listen should they choose to get it. And, unlike doom metal which is one of the other genres that usually uses massively lengthy songs, the tracks here are not repetitive at all and can easily be distinguished. If someone is a fan of the music of a band like Animals as Leaders combined with the clean vocal talents of the singers from The Ocean, then one basically has themselves an excellent post metal band.