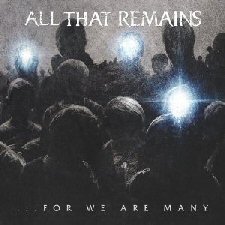 For we are dull as dogshit…

Just when you thought you’d heard all the generic, paint by numbers metalcore, along comes All That Remains. These guys have bought the metalcore formula instruction book, have read it over and over, and are milking it for all it’s worth.

Which isn’t actually such a bad thing, if the band in question can write memorable tunes. That’s a massive ‘if’ in this band’s case. All That Remains’ tunes are really quite pedestrian, and that’s being kind. Someone a little more cruel might say boring. There’s a serious sameness to their songs that have you nodding off by track four or five. There’s a distinct lack of imagination and creativity in the arrangements and even in the musicianship. It’s difficult, even after multiple listens, to single out one single track that stands out as being something significant or special, the entire albums plays out as one bland whole. It’s one of the more undistinguished albums I’ve heard this year and probably for several years.

In fact, one song can be given special mention, final track and acoustic ballad The Waiting One, but for all the wrong reasons. Possibly the most vacuous and pointless attempt at a power ballad your ears will have the displeasure of hearing for quite some time, and just a lame attempt to give the album a semblance of dynamics and variation. Just awful.

Just as McDonalds is to world cuisine, just as soccer is to world sport, so is All That Remains to world heavy music. Very popular, and yet strangely empty, tepid and unsatisfying. Aimed at the absolute lowest common denominator. If you’re into this style of music, avoid this like the black plague, and buy some melodic Aussie metal. You’ll be supporting this under-supported scene of ours, and your ears will thank you.