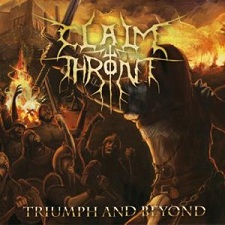 Pour a few pints and enjoy this...

Claim The Throne may seem like the typical folk/ viking metal band, but they take all the elements about it and do it well. Drawing on influences from Eluveitie, to Korpiklaani, to Finntroll, there is a lot for folk metal fans to appreciate here. Since their last album, the band has expanded and diversified more in their song choices spread throughout the album. Some are hard, others softer, and others just meant for fun without staying too serious to the 'metal tradition'. It's a very energetic and relaxed album, depending what one's tastes are.

Sometimes there are full on raging instrumental tracks with epic features like grandiose background keyboard, deep choirs, and melodic death metal formula chugging guitars such as with the opening track. The typical Claim the Throne Sound usually involves melodic death metal mixed with acoustic moments and harsh vocal verses mixed with cleanly sung choruses. Usually in the past, this would be how Claim would do all their tracks with just certain parts in different places so it seemed like something new. However, folkish and weird tracks like "Mystical Hermit in the Woods" diversifies things a bit by adding on pure, raw folk elements. It is a bit humorous, but doesn't sound like a complete drinking song like some of Korpiklaani's stuff does. "The Lake" features female vocals overlapping the rough male ones so there is more dynamic to the whole folk elements. "Rat Infested Hut" may the only questionable song because the title doesn't seem to really have a point and the sound is more generic and can easily be passed off. Those looking for a drinking song would look to "Two Pints of Honey..”. It is a bit fast paced and sometimes the guitars overtake the keyboards, but doesn't completely destroy the folk influences of the music.

"The Sermon" is the softest track on the album as it is solely keyboard, but fits as a semi-closer for the album. There are a few re-released tracks on the album as well to add some good bonuses. "Words of the Great Oak" is from their debut album and it a bit shorter than the original, but the sound has been updated for better production. Fans who have not heard their older works can hear a bit more of a black metal influence on the harsher vocals rather than the more melodic death metal sound that is carried with the band today”. Set Sail on Ale" is a great acoustic closer just solely guitar and keyboard with both the male and female vocals involved. It is very similar to "The Lake”, but between the two, "Lake" is a lot heavier.

For those seeking a well balanced folk metal album that has a traditional folkish sound and doesn't just rely on flutes and violins while trying to sound like it came out of a Lord of the Rings movie, then Claim the Throne's second album is a place to start. Their earlier works were good, but not as diverse or folk influenced as this one. Hopefully this is a good sign of more 'organic' works to come and not the usual cookie-cutter stuff.

More from Claim the Throne