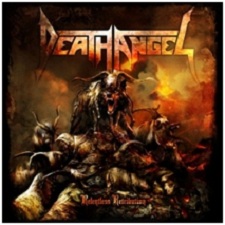 ‘Relentless Retribution’ is Death Angel’s sixth studio album and the band has changed somewhat. Gus Pepa and Andy Galeon both left the band in the last year, which left guitarist Rob Cavestany and vocalist Mark Osegueda as the bands only original members, and cousins. But, for what's it worth, the band still sounds great and tackle everything with dexterity. The new bassist and drummer stick to the standards that their predecessors had set with the drums standing out on several occasions. Unsurprisingly, Cavestany and Osegueda are the most impressive in the band, especially as they’re the chief songwriters on this album. Osegueda can still belt out his signature high-pitched shrieks whilst Cavestany adds some interesting backing vocals on some tracks, in addition to his usual shredding skills.

The album starts off well with title track ‘Relentless Retribution’, which is smart, mid-tempo, catchy and really showcases their classic thrash sound with some awesome riffs courtesy of Rob Cavastany. The next track, however, ‘Claws So Deep’, takes a completely new direction for Death Angel, with an almost cheesy chorus that will probably see true fans cringe slightly and wonder whether they have, perhaps, accidentally slipped and put on a Trivium or Killswitch Engage track. Part of me wonders whether this diversion from their normal style is an attempt to gain some younger fans or whether it was inevitable given that it was produced by Jason Suecof, who also produced Trivium and All That Remains’ albums. Unfortunately, the song can’t even be saved by an acoustic addition by legendary Mexican guitar duo Rodrigo y Gabriela.

Having said that, old school Death Angel fans shouldn’t be too worried as there are some killer thrash moments on this album. ‘River of Rapture’, which has recently found its way into their live set, is truly rifftastic and ‘This Hate’, by far, has the best chorus on the album, mainly due to Mark’s vocal delivery. ‘I Chose the Sky’ also highlights Mark’s vocals with a great melodic chorus. In my opinion, they close the album with the best track, ‘Where They Lay’, an old school thrasher which has similarities to Metallica’s ‘Whiplash’, and sees Rob and Mark delivering some overlapping vocals which work really well.

Overall, it is a slightly below par release with a few notable highlights. It’s not so much that it’s a bad album; it just slightly lacks the originality, riffs and other intricacies that made their previous releases so phenomenal.