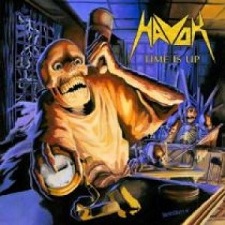 Things are looking up for these young thrashers

Denver (Colorado, U.S.A.) thrashers Havok first came to my attention with their energetic album Burn, which hit the shelves in 2009. Like a lot of modern thrash bands, they aren’t breaking new ground, but they are showing that this particular genre of metal is still exciting. For their sophomore effort, the quartet have teamed up with metal guitarist extraordinaire-cum-producer James Murphy and the result is ten tracks of relentless and often intricate thrash metal. With some good promotion and a bit of luck getting the band on some high profile tours, this should be the album that really gets this band noticed.

Some thrash bands lean more towards hardcore or punk like roots relying on speed and solid chords as their driving force. Others like Havok use intricate riffs and a multitude of tempo changes as their weapon of choice. This puts them alongside the likes of Bonded by Blood, Warbringer and Merciless Death.

There really isn’t a more apt title for the opening cut - Prepare for Attack. It’s a smooth transition from the band’s debut that clearly marks their intention for their second album - thrash! Vocally, David Sanchez channels a mix of Testament’s Chuck Billy and former Exodus vocalist Steve “Zetro” Sousa predominatly. At times, it’s mixed with traces of Mille Petrozza (Kreator) and even Dave Mustaine (Megadeth). Although at one particular point during the latter stages of D.O.A., Sanchez rips out a blood curdling scream similar to that of Tom Araya during Slayer’s Angel Of Death, that will make any head bang as the band unleash hell with a barrage of furious riffs and blasting drums.

Long standing thrash fans will talk up the importance of guitar teams regardless of which one they are referring to - Hetfield and Hammett, Hanneman and King, Holt and Hunolt, Mustaine and Poland. Havok’s vicious guitar attack might not be anywhere near as well known at this point, but Sanchez and Reece Scruggs certainly know how to work their magic both as a team and individually and they work it well, too. Just check out Covering Fire and the slower Killing Tendencies!

Havok have stepped it up this time around and have produced a killer thrash album. Think I’m wrong? Check out Scumbag In Disguise, the crushing title track, and the frantic Fatal Intervention and then get back to me. These guys are tight and energetic and every element of that is reflected in Time is Up from start to finish. It’s early days for 2011 but this is the thrash album of the year. Enough said.