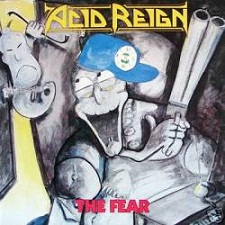 Their finest hour! … or at least 42 minutes

After the release of their first EP, it was only a matter of time before Acid Reign unleashed their debut long player. Dubbed The Fear and originally released in 1989, the group had undergone a line-up change, and The Fear would be the album they would take to the masses opening up for such thrash legends such as Nuclear Assault and Exodus throughout Europe and the U.K.

You’ll quickly recognise the opening strains of You’ll Never Know (W.T.N.W.S.) as that of Goddess, which first introduced us to Acid Reign with the Moshkinstein release. However, you will also quickly learn that whilst the band manages to tackle some seriousness lyrically at times, they are also not taking themselves too seriously either at the same time. Brief comedy moment aside, The Fear is a much more mature thrash album from a musical and a production point of view. Reflections of Truths and the single Humanoia lead the charge.

The title track, The Fear, is another strong point as the stomping intro ushers in the track but ultimately, Life in Forms is the album’s shining star. It delivers mood, tempo, aggression, and vibe. Perhaps if they penned more songs like this, the group may have been around for longer or made more of an impact on the scene back in the day. As simple as Life in Forms is, it’s solid thrash track. It’s no Seek and Destroy, Bonded by Blood or Peace Sells…, but it’s solid nonetheless. Same can be said of All I See, but really, these couple of stellar moments weren’t quite enough back then to elevate the band to the upper tiers of thrash-dom.

The bonus included on The Fear is the Humanoia single which features the track itself along with four live cuts – All I See, Goddess, Bullyboy and Chaos. It’s inclusion rounds out this era and this reissue nicely and for fans that might not have everything, well, this reissue certainly wraps that up.

Unfortunately for Acid Reign, The Fear arrived at the tail end of the 80s – a time when the big boys of thrash had released their quintessential albums. By this stage, Master of Puppets, Reign In Blood, Peace Sells, Among The Living and Bonded by Blood were a couple of years old. Sure, 1989 was a year that would also see many a fine thrash release hit the shelves in the form of Sodom’s Agent Orange, Kreator’s Extreme Aggression, Sepultura’s Beneath the Remains, Testament’s Practice What You Preach, Exodus’ Fabulous Disaster and Overkill’s The Years of Decay, it would still only be another two years or so before Metallica released their self titled “black” album and the likes of Nirvana and Pearl Jam would become the next big thing music.

It’s certainly nice to have these gems of lesser known thrash acts available once again after all these years. Props to both the band and Lost and Found Records for making that happen. Die hard thrash heads that have to have everything will love these reissues and perhaps even fans of the band might see some value in picking these up (extras or replacing worn out vinyl) but I’m unsure of how much they will appeal to the masses second time around.