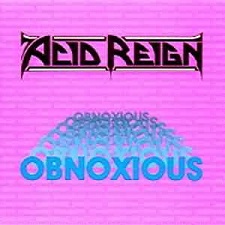 Crash and burn right out of existence

You know how some bands release an E.P. that gets some attention and gets them signed to a label? And then how that same band delivers a reasonable debut album that still shows promise that really leads you to think that the all important album number two is really going to be something very special? What happens when that sophomore release turns out to be a steaming pile?

It pretty much signals the end of everything for said group. In the case of U.K. thrashers Acid Reign, their second and final release was exactly that. It is the final nail in their coffin. It was called Obnoxious and everything about it – from the in your face hot pink cover to the scattered delivery of the eight tracks that made up the original release – everything about this album was Acid Reign raising their middle finger to whomever was looking in their direction, and they clearly didn’t care about the repercussions.

If nothing else, the album sounds better than the band had ever done before. The mix was more balanced and the guitar tones a little more in your face and less scooped and shallow sounding which dominated the first two releases. But musically, it’s scattered like I said before. It’s not just thrash but there’s disco, comedy. I know bands like Lawnmower Deth made a career of that early on with at least one member of Acid Reign (guitarist Kevin Papworth) going on to join the Deth post Acid Reign, but for whatever reason, whatever they were trying to do with Obnoxious failed.

At times, it’s more complex than previous Acid Reign releases with You Are the Enemy being a good example of this. Then they serve up something like Phantasm which well and truly overstays its welcome clocking in at almost nine and a half minutes. Their second attempt at such a lengthy number, Codes of Conformity, shows promise initially until it’s derailed by a totally out of place and ridiculous disco breakdown. At least Metallica’s …And Justice For All was engrossing when it chimed in for that duration. Acid Reign’s strength lays predominantly in shorter numbers like the thrashy My Open Mind and not “comedic” numbers such as This Is Serious which prove to be just a waste of space.

The bonus here for the completionists is their cover single Hangin’ on the Telephone (originally recorded by Blondie) which features again a couple of live tracks – Motherly Love and Warriors of Genghis Khan (which was originally done by post The Young Ones spoof metal group Bad News). It rounds out everything that Acid Reign ever did to this point nicely. That’s really about it.

Maybe Acid Reign knew this was going to be their swansong. I don’t know. They did continue to show some of that promise on here but it was in amongst some generally lacklustre material and ideas that simply didn’t work. If you picked up the others in this series, then you may as well add this to your collection. But if you’re looking for “the” album that defines Acid Reign, start with The Fear and add this one at your own risk.