The Here and Now 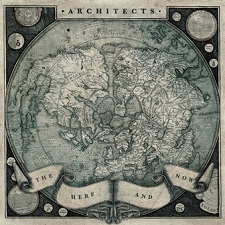 Too much chance in their short time away

Brighton (England, U.K.) metalcore act Architects have never been a band afraid to take chances and try their hand at something new. After all, the group’s last three full-length releases (2006’s Nightmares, 2007’s Ruin and 2009’s Hollow Crown) have all shown just how much the band have changed in direction and sound. And while fans have been less than enthused by the group’s constant shift in sound, there’s been more than enough singing the band’s praises to keep the band from completely disappearing into obscurity.

Now returning with their fourth full-length effort The Here and Now, the five piece act (comprising vocalist Sam Carter, guitarists Tom Searle and Tim Hillier-Brook, bassist Alex Dean and drummer Dan Searle) have once again undertaken a transformation. But unlike past changes, Architects’ sound on The Here and Now is definitely one of the most daring shifts in direction the band have taken yet, and one that will certainly divide their fan base between fans and those who once were.

The first single Day In, Day Out may reintroduce Architects in a heavy fashion, but it’s also quite restrained to what fans may have expected from the band given their past history. Producer Steve Evetts may have given the band a very upfront and powerful sound, but it’s the band’s song writing that has been stripped back from the somewhat chaotic sound of old, instead opting for a more calculated approach in the way the riffs are used. The other significant change that’s really noticeable is the greater presence of Carter’s clean vocals alongside his growled efforts. Overall, Day In, Day Out is a solid opener, and one that effectively manages to highlight the melodic aspects of the band’s song writing that was always there underneath their chaotic delivery of the past.

Learn to Live (the second single from the album) and Red Eyes follow a similar line to their predecessor, but with the melodic aspects of the choruses and the heavier extremities pushed to the fore, while the fast paced Delete, Rewind and The Blues are a little more in line with the band’s past, albeit with a lot more clean vocals and not as dense sounding.

There’s an undeniable punk rock influence heard within BTN that’s quite interesting and unexpected, while An Open Letter to Myself and Heartburn are totally different from anything the band has done before, with the pair drifting towards ballad territory, but delivered in the mould of post-hardcore/rock territory. Both are noteworthy tracks, with the latter the stronger of the two.

Finishing up the album is the speeding Stay Young Forever (which features a guest vocal appearance from Comeback Kid front man Andrew Neufeld) and the scathing closer Year in Year Out/Up and Away (Which features Greg Puciato of The Dillinger Escape Plan on guest lead vocals).

To be honest, The Here and Now sounds like a natural progression from what the band put forth on Hollow Crown. But as strong as The Here and Now is, I can’t help but feel that the band may have pushed things a little too far too soon, and in the process lost some of the edge that was a key part of their old sound.

In the end, it’ll be fans that will pass the final judgement, but for me, The Here and Now is a solid album, if a little familiar and predictable sounding at times.