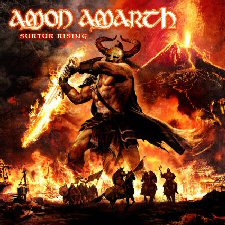 So you know how Sweden’s Amon Amarth have been around since the early 90’s, have a relatively staunch back catalogue, and have also amassed a pretty large following over the years? Yeah, me too, but somehow all of the hoopla surrounding the band has passed me by and it’d be a stretch at best to say that I could count the number of times I’d heard them on more than one hand. With the arrival of Surtur Rising, the band’s eighth full length release, on my desk I was immediately keen to have my first meaningful experience with a band that most people out there seem to go apeshit over.

I’ve got to be honest and say that my time with Surtur Rising hasn’t quite the revelatory experience I thought it was going be when you consider all of the fanaticism that seems to follow the band around. What was I hoping to hear? To be honest I don’t really know. What I do know, however, is that Amon Amarth’s melodic death metal sound on this album is far from unique and far from being beyond reproach. Don’t get me wrong here, the band clearly knows how to write a solid melodic death metal riff (and you’d hope so after all of these years), but I’d be lying if I said that what I hear on Surtur Rising isn’t also pretty generic stuff at the same time.

The thing that really struck me about Surtur Rising is the absence of fiery passion in the material. For a band so entrenched in subject matter concerning Norse gods and battle, you’d think the guys in Amon Amarth might at least try to live up to the subject matter they are exploring by, you know, giving us something that is formulated and played with conviction rather than seemingly turning out a paint-by-numbers melodic death metal album devoid of spark or flair. Are there at least moments where the band seems interested in and connected to what they’re doing? Sure. Are these same moments few and far between? Abso-fucking-lutely. For every passage like the excellent first 90 seconds or so of The Last Stand of Frej or some of the melodic breaks in Doom Over Dead Man there are countless others like the entirely forgettable tracks A Beast Am I or Slaves of Fear. This is not an album that comprises great songs, it is one that relies on singular moments to carry it over the line and for that reason above all others it has bored me endlessly and mercilessly.

I have little doubt that long time fans will greet Surtur Rising with open arms and happily ignore its many uninspired moments and that’s absolutely their prerogative. For me personally I’m left to wonder whether or not I’m missing something about the band or if this wasn’t the album that I should’ve begun my Amon Amarth journey with because, surely, they’ve earned the adoration they continue to receive, right? Based solely on Surtur Rising I have to wonder.