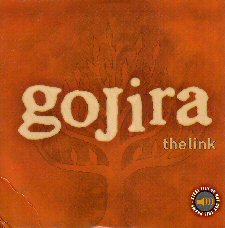 Give it time and you will be rewarded!

Originally starting life out as Godzilla in 1996, this French quartet soon re-emerged under the name Gojira, the Japanese name for Godzilla, prior to recording their first album, Terra Incognita. It wasn't long after that they would return with their sophomore effort titled The Link which was originally only available in their native land. Since that time, they've inked a deal with French label Listenable Records and although their third effort is due later this year, their new home have made their previous effort available to a world wide audience.

The bio says that “The Link is a challenge for all columnists who try to translate into words the Gojira alchemy” and it's pretty much spot in. Imagine mixing the sloth like riffs of Covenant and Domination era Morbid Angel with the dynamics and complex rhythms and time signatures of the likes of Meshuggah and throwing in a helping of industrial metal such as Godflesh and Rabies Caste - that's about the best I can come up with to describe the behemoth that is Gojira. All of those things are plainly evident in not only the lead track (which is also the title track), but the rest of the album as well. Death Of Me bounces along with a death like groove before a Morbid Angel feel takes of the varying elements of the rest of the song which exhibits no true traditional structure at all. The subtle xylophone's of the odd instrumental piece Connected soon give way to Gojira's trademark sound and signature with Remembrance taking off in full effect. The simple guitar strumming in Torii is beautifully soothing to the point that it could be found on one of those relaxation CDs.

The almost painful sounding arpeggio intro to Indians is nothing compared to the grinding feel generated by the mid paced chugging tempo until the first of several changeups is pitched in the form of a typical four beat bar. The jarring dynamics easily make this one of the most memorable tracks on offer here. The frantic double kick pace of Embrace The World (which also includes the use of Tibetan monks) leads into yet another standout track that flips between tempos and form throughout before the sluggish pace of Inward Movement is somewhat reminiscent of some of the more drawn out Godflesh songs from back in the day. It's not without the odd throwback to brutal grind either. Over The Flows displays a schizophrenic changeup between sedate and frantic but still retaining a large amount of melody while Wisdom Comes is more straight forward death metal than anything else. Dawn is a grand instrumental closing track that showcases several of the styles that Gojira like to flirt with - from the melodic intro to the rhythmic outro and the dynamic build ups in between.

Even though the album is two years old technically, the remix and reissue on Listenable Records is finally making the brilliance of Gojira available to a wider audience. There's a variety of influences and styles broached on The Link, none of which fail by any stretch of the imagination. It's almost unfair to try and put into words such a challenging cocktail. It's unfair in the fact that it is damn hard to do this album justice by doing so. If you've got an open mind to new music or if any of the above influences strike a chord (pardon the pun) with you, then without a doubt this is something you should seriously invest some time into checking out.