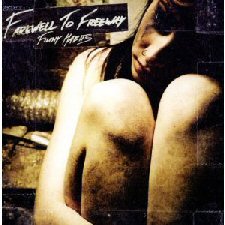 "Sounds like all your favourite bands!"? Let’s see about that

I recently spoke to a friend who referred to the metalcore sub-genre as "emotional death metal”. After several listens to Farewell to Freeway's latest release Filthy Habits, I can see why he said that. While the sounds began to paint a musical picture inside my head, I've picked up on elements of death metal such as the overall heaviness of guitar riffs, harsh vocals, and pounding drums.  I've also noticed that metalcore generally contains elements not heard in your traditional death metal. For instance, Farewell to Freeway uses two vocalists. Adam Lambert (not to be confused with the glam pop-rocker of the same name) is the main vocalist, and guitarist Chris Lambert share vocal duties.  The vocals can be harsh, but they can become highly melodic and "clean" in an instant. Melodic guitar riffs seem layered on top of the blazing heavy riffs, the songs are angsty, and in Farewell to Freeway's case, the song titles themselves are more humorous or ironic than dark.

The album's opener "Liquor? I Don't Even Know 'Er" begins with a retro sounding feedback effect followed by a heavy bass line and drum sequence. The amp feedback especially makes "Liquor? I Don't Even Know 'Er" very memorable as the lead-off song. As the "liquor" in the title suggests, this track is a tale of drinking to the point where you can finally bear to have sex with someone you feel like you don't even know.  I thought it was extremely clever of the band to include a brief breakdown immediately after the lyric, "Night after night /Maybe we could break it down”. In addition to the intro and musical qualities that make this song memorable, the emotional lyrics and the angry, heavy riffs that paint the picture of the relationship struggle set the tone for the rest Farewell to Freeway's Filthy Habits.

"Usurper" is another standout track, and it became an instant favourite during my first listen to Filthy Habits.  It has quite a complex melody featuring a higher pitched guitar riff over the rest of the much heavier instrumentation. I really like the feel of this one, with its aggressive lyrics and a rhythm that's perfect for moshing.

Another unique touch to Filthy Habits is the slower instrumental track "Bones and Tissue" that falls near the middle of the album. It is brief, but it offers a nice change of pace--almost relaxing--after hearing the wailing vocals, blast of the drumming, and insane guitar riffs.

"Dharma's a Bitch" is one of Farewell to Freeway's songs with a title that shows of the band's sense of humor and irony. I've always heard that karma's a bitch, but apparently Dharma is one too! This tracks starts out heavy on the cymbals with some lighter drumming along with it. The clean vocals are probably used more on this song than any other song on Filthy Habits. This almost makes it "catchy", but sometimes I feel like the singer gets a bit whiny too on this one when he's not screaming. With all the songs on this album about life experiences, love, and personal relationships gone bad, I sort of expected for even the clean vocals to be sung with power and an angry confidence.

Another one of my personal favourite tracks from Filthy Habits is "Token Ain't Weezy”. Although I first thought the intro riff sounds a lot like Framing Hanley's cover of "Lollipop," that shouldn't fool you into thinking the rest sounds like it too. This song has a great beat for the moshpit, but it has several changes of pace--ranging from the heaviest metal to the most chilled out rock.

When comparing this album to the works of the more established metalcore bands, Farewell to Freeway has the potential to join their ranks. I don't think this band or album would be the best at explaining "this is what all metalcore is supposed to be like," but I think both perfectly illustrate the diversity among all the bands that exist in this popular--and still growing--area of metal. Farewell to Freeway's Filthy Habits should not disappoint for fans of melodic metal that are looking for a unique spin on their usual fare. I especially recommend it to those who are into bands such as Shadows Fall and All that Remains.