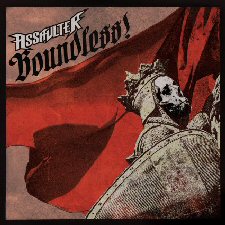 Assaulter's second album, 'Boundless', isn't as boundary defying as fans might expect from the title. Living up to their previous album, it's still pretty gritty black thrash/black n' roll music that may sound impressive after the first few tracks, but can tend to get repetitive after a while. At least that's the impression fans may get from listening to the first track, "Entrance”, and on through "Into Submission”. They're fast, aggressive, and basically sound like they could fit very well onto an Exodus or Slayer album if the black metal vocals were swapped for a more rough scream. Since this band only comprises three people, it's pretty minimalist and simple, but still fans and listeners may begin to yawn by track three and hope that there is something just a bit more.

Fortunately, there is. One thing Assaulter ends up doing well on this album is delving into a more middle eastern feel to their music, especially with "Slave to King”, which features some genuine chanting/ wailing to really give an organic feel amongst the thrashy riffs. No, these guys will not be as eastern oriented as a band like Melechesh, but just the simple groove of it rather than the typical westernized thump thump thump of the chugging riffs makes a whole world of a difference, and a lot more appreciable. Other tracks like "The Perpetual War" and the giant closer, "The Great Subterfuge”, are more along the lines of blackened groove metal as they trudge along, focusing more on rhythm than complexity and formula. The drums are more highly varied than just straight on beatings; here they sound like well paced, militant marches that really bring out the groove and rhythm much better than the guitars. Their gritty, sludgy style may have been appreciated earlier in the album, but by this point it seems like fans will probably seek to enjoy something a bit different than just the guitars, and thankfully the drums deliver that.

The vocals are the usual black metal rasp and suit the music well- the album, after all, is more about the instrumentation than the vocals, which seem a bit one sided while hearing them, just like the first few tracks. Still, the eastern bits are what really make the album and also will be the most intriguing to fans; it's a shame they didn't mix it in more with the rest of the music. Older fans will appreciate the diversity of this between their first and second albums, but new fans should really focus more on the middle section rather than the first or last half because it will probably not make as great an impression due to the repetitiveness of the music and the lack musical complexity compared to the other tracks. It almost makes them feel like another, slower version of Darkthrone, and the world already has enough of those.