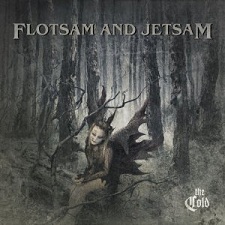 Released in September of 2010, Flotsam & Jetsam's tenth studio album The Cold is impressive to say the least. In a time when many seasoned bands put out material that seems stale or contrived, these veteran thrashers prove they can break this ugly cycle.

While most of the tracks on The Cold feature consistent themes of being angry, let down, and left feeling alone, each song on this album stands out and instantly becomes ingrained in the listener's memory.

The opening number "Hypocrite" sets the stage for the emotions that are poured out for the duration of the record. It begins with an ominous keyboard intro and slow, clean vocals. Screaming guitars kick in, and a typical thrash style continues through the verses and the chorus. The vocals, although they become louder and faster, do not get lost in all the heaviness. Eric "A.K." Knutson's singing ability really shines on this album. Powerful drums and bass liven up the chanting of "hypocrite" that ends the choruses--making this song incredibly mosh-worthy.

The seven-and-a-half minute title track "The Cold" is climactic and theatrical, and sounds "big." It does not sound like something a thrash metal band would normally put out, because even the heaviest parts of the song aren't particularly fast. "The Cold" takes awhile to build up to the chorus, but when it does, it roars. The chorus is catchy, and the guitar solo is almost like something straight out of a power ballad. The sounds of someone shivering that come before the bridge do a wonderful job of conveying the atmosphere and the feeling of coldness.

"Blackened Eyes Staring" starts off with a bombastic, thrashing riff and a fast beat. Just before the chorus, a keyboard delivers a rapid melody that adds just a little something extra. The dark lyrics may be about a girl who is dead inside, but as "A.K." sings the words, "an evil little smile that gets me high," there is just something sinister and sexy about it.

"Better Off Dead" is truly an epic work, and it definitely stands out the most. As the album's centrepiece, this song succeeds at painting a perfect picture of desperation with its music and lyrics. Due to the intensity and subject matter of this track, it's almost like it could be Flotsam & Jetsam's modern take on "Fade to Black." Like The Cold's title track, "Better Off Dead" is also dramatic and climactic. Once again, "A.K." does a masterful job of powerfully delivering the lyrics, even adding some gritty snarls at the ends of the words. It's as if he's an actor delivering the lines of a play's most important scene on a stage. The note he holds out at the end is just killer!

Like the vocals, the guitar work on The Cold--courtesy of Michael Gilbert and Mark Simpson (who has since been replaced by original guitarist Ed Carlson)--is brilliant, especially on the title track. The explosive rhythms of this album would not have been complete without bassist Jason Ward and drummer Craig Nielsen.

I can't speak highly enough of this album. It has some great thrash metal moments, but it really transcends into all the sub-genres of hard rock and metal music. The melodic beauty combined with with the dark, sinister, and introspective moments really makes The Cold something special, in that will appeal to the ears and souls of most metal fans and not just those who are hardcore fans of "The Flotz."