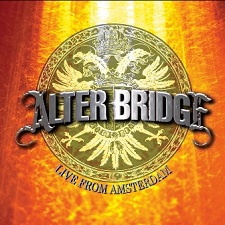 The perfect companion to their classic 'Blackbird'

After a lengthy two year wait, Alter Bridge’s first live C.D./D.V.D. package has finally been given the go ahead for release outside of Amazon, where the stand alone D.V.D. had been selling well beyond the band’s humble expectations - garnishing critical acclaim from fans and critics alike.

Recorded in December 2008 at the Heineken Music Hall in Amsterdam (Netherlands) while in support of their just released second album Blackbird, Live From Amsterdam showcases Alter Bridge’s electrifying stage show in front of a sold out crowd of eight thousand, and proves beyond any doubt that the band can deliver everything that’s present on their album, and them some.

The band gets the show off to a rocking start with Come to Life, where the crowd responds enthusiastically from the opening chords.

Throughout the 100 minute concert, the band rarely set a foot wrong, with every single one of the eighteen tracks played performed to perfection. As you would expect, the show is drawn heavily from their newest release at the time, with tracks such as Before Tomorrow Comes, Brand New Start, the ‘heavier in the live setting’ crunch of White Knuckles, Buried Alive and Ties That Bind all given the live treatment.

But the real stand-outs from Blackbird have to be the band’s intense rendition of Coming Home, the acoustic version of Watch Over You, Rise Today and the absolutely classic title track Blackbird (which is introduced with a brief snippet of The Beatles’ Blackbird).

Of course, fans of the band’s debut One Day Remains aren’t left out in the cold, with all of the album’s hit singles performed here (Open Your Eyes, Find the Real and Broken Wings), along with fan favourites such as One Day Remains, In Loving Memory and Metalingus.

As an added bonus for fans, the band also throws the rarely heard New Way to Live into the set-list (the b-side to the Rise Today single), and an absolutely stomping cover of Robert Johnson’s Mud Bone (which replaces the band’s cover of Led Zeppelin’s Traveling Riverside Blues on the original D.V.D. release).

In addition to the live C.D., this deluxe reissue of Live From Amsterdam also comes with a 53 minute documentary (where the band talk about their initial formation, their experiences touring together, their crew, their favourite Alter Bridge tunes and pre-show rituals) and a photo gallery (which comprises of sixty-six shots).

All up, it’s hard to believe that it’s taken some two years for ‘Live From Amsterdam’ to finally see the light of day. But given the legal disputes it’s probably not all that surprising really, because after a listen and viewing of this package, you can understand that neither party wanted to share the spoils of what is nothing short of a stunning package, and one hell of a live show.

Overall, this is an absolute must have for Alter Bridge fans. It honestly lives up to the hype, and has been well worth the wait.