Welcome to the Morbid Reich 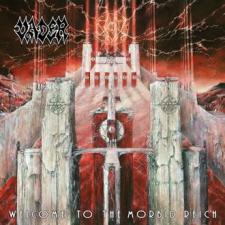 Did we ever actually leave?

I think it’s pretty safe to say that after nearly 30 years in existence and now nine full length albums under their belts, no one walks into a new Vader album expecting to be surprised by what they hear. This is a band that has fostered a distinctive sound over the course of their career and has more or less stuck to it unwaveringly. Sure, no doubt some albums are better than others but, overwhelmingly, with the exception of slightly differing levels of quality in the song-writing or in the performance of the material across albums you know exactly what you’re going to get from the long-running Polish act.

For some I suspect that this aspect of the band is a comforting thing and for others it might well be the opposite. For me personally I’m a bit of a take it or leave it kind of guy when it comes to the band, tending to favour individual tracks above albums as a whole (seriously, how good are 1995’s Silent Empire or 1997’s Carnal still to this day?). That being said, however, I’m not averse to listening to a Vader album back to back either - just a lot less regularly than I might have done 10 or 15 years ago. This brings us to the band’s ninth full length release, Welcome to the Morbid Reich, which sees Vader pretty much doing exactly what they’re known for which, as I outlined, will probably either excite the hell out of you or leave you somewhat disinterested.

Out of the gates it’s clear that the angry fire that burns at the core of the band still has plenty of fuel to consume and this isn’t just due to Piotr Wiwczarek’s instantly recognisable snarling from behind the mic either but is also because of the excellent and very recently added musicians who comprise the rest of the band. Much of the credit for making this album as vicious as it is surely has to go to new guitarist Spider who has brought with him a slightly more ambitious technical underpinning which is something I’ve often wished the band would incorporate more of. Add to this the tight and fast as hell rhythm section of drummer James Stewart and bassist Hal and you get a band with a line-up to be envied by the band’s peers.

It probably is a little unfair of me to claim that Welcome to the Morbid Reich shows no musical differentiation or progression over its predecessors. There is most definitely a sense of the grandiose in its construction with some light use of orchestration here and there and a handful of the album’s tracks running for between four and five minutes instead of the standard two to three minute duration of the band’s songs. It is also true, however, that while these dalliances are absolutely welcome additions they are also essentially window dressing on top of the band’s very well known sound that is still at the heart of each and every moment on the album.

As much as I can genuinely say that I’ve enjoyed my time digesting Welcome to the Morbid Reich I think I can also safely say that once this review has been penned it’ll be relegated to being just another Vader album sitting on top of a pile of other equally good but simultaneously non-excitement inducing Vader albums whose only crime is not that they are bad or are undeserving of praise but rather that they are, more or less, the same album I’ve been hearing every other year for the past 15 years.

So, from my perspective, on one hand we have an album that when taken out of all historical context and viewed on its own is undeniably solid death metal that is played with incredible proficiency while, on the other, we have a solid death metal album that sounds just like what we’ve come to expect from a very long running band, save for a few minor tweaks here and there. While it’s probably abundantly clear that I fall into the latter way of thinking it’s not to say that I can’t appreciate Welcome to the Morbid Reich for what it is. I just know that it’s unlikely I’ll be returning in a hurry.