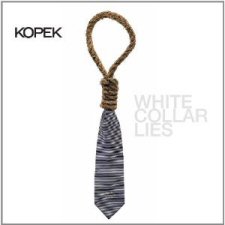 White Collar Lies are spreading from the Emerald Isle.

Irish rockers Kopek may have been together for nearly a decade, but this trio have only recently released their debut album to the masses.

White Collar Lies is a diverse album that contains elements of hard rock, blues, alternative, and just about every shade in between. It definitely sounds like a fresh modern rock record, but its edgy '60s/'70s retro feel makes it all the more interesting.

Kopek unleash the sex, drugs, and rock 'n' roll right from the start.  Opener "Cocaine Chest Pains" just happens to be one of the album's more gutsy hard rock tracks. As the title suggests, the song is about cocaine, and it compares being addicted to falling in love with a woman. The lyrics seem to take a dismal view of the drug use, but the chorus along with the beat make this song quite catchy regardless. It's filled with heavy, distorted guitar riffs that give the song a raw vintage sound that's present through most of the album.

Kopek immediately slows down with their next song, title track "White Collar Lies." Compared to the in-your-face "Cocaine Chest Pains," it's not what I'd call a hard rocker. It is politically charged, heavy on emotion, and perhaps it would feel more at home on alt rock radio.

Even though this band calls Ireland home, I still feel like this song has a universal theme that resonates with me as someone from another country. Corruption, greed, economic collapse, unrest, and war are universal themes. The title "White Collar Lies" is a pretty good way to sum up that frustration with government and big business, no matter what corner of the world you're in.

It actually took awhile for this song to grow on me. At first, I found it to be kind of whiny and repetitive. I'm not big on political or "save the world" songs, and if I wanted to hear one, I'd gladly listen to something by Ireland's established rockers, U2. On further listens, I discovered a certain beauty in it--especially in Daniel Jordan's vocals. In the chorus, and the even more so in the bridge as the song escalates, Jordan gains intensity and sings with a heartbreaking plea.

My absolute favorite song from White Collar Lies is "Fever." It's one of the rockers, but its bluesy rhythm really gives it it's personality. This track is incredibly sexy, especially when it builds up to the chorus. Each time I hear "I bet your dying to show me Everything that you know I just can’t keep my hands off You give me fever," I wish I could be at a concert dancing with the hot rocker guy next to me.

The acoustic track "Sub Human" incorporates something you don't find every day in rock music--the didgeridoo. You read that right... I said didgeridoo. Oddly enough though, it works, and it works well. The instrument serves as the underlying hum to the acoustic guitar and vocals. The dark lyrics aren't political like those of "White Collar Lies," but they do vividly illustrate the hate and hypocrisy that exists in the world.

"Bring It on Home" retro rock style channels the Rolling Stones on steroids. (Which is an odd concept once you think about it, because steroids are probably the only drug Mick and Keith didn't indulge in during their heyday. Look how skinny those guys still are... they did a lot of stuff, but probably not the 'roids.)

This track's heavy bass line is something straight out of a danceable late '70s/early '80s Stones song. The vocal acrobatics really add something special to it too. Daniel Jordan beautifully accents certain lyrics with his airy falsetto but still maintains his gritty rocker composure through much of the song. The falsetto was a nice reminder of Justin Hawkins, the lead singer for one of my favorite, but unfortunately defunct bands, The Darkness.

Kopek's raw rock 'n' roll energy is intense enough for the serious subject matter that is offered in abundance on White Collar Lies, but they still know how to have fun with their lively, dance-worthy tracks. I thoroughly enjoyed this album, and I can't wait to hear what will come next from this band. As a fan of other "retro rockers"--those who overtly pay homage to their classic rock idols, I'm excited to see another band do this well and keep a unique identity in the process.