The Creation of Pain 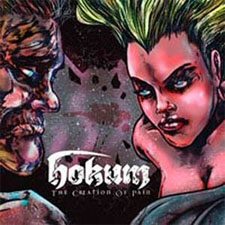 This album is the second full length studio release by Germany’s Hokum – following 2009’s π and 2006’s EP, No Escape. The Creation of Pain is an interesting expression of an incredibly varied style of metal and one which I struggled with in reviewing.

It wasn’t very long into the album before I was being hit by flashes of sound of several bands like Opeth, Tool, Howl, The Haunted, Mastodon and Shadows Fall. There is simply just so much going on in The Creation of Pain. But one thing that certainly is clear is how technically proficient these guys are. The inventiveness between the two guitarists Michael Vogl (lead) and Benjamin Geppert (rhythm, vocals) is assembled with great authority throughout the album and definitely accounts for the length of most of the tracks with the likes of Walking Ghost Phase closing out at just over 10 minutes. Nicolai Retzlaff’s work on the drum kit is impressive and definitive while Jonas Fishcer (bass) adds a great sense of groove and texture that is very reminiscent of older styles of metal. In my opinion, André Epperlein has one of those vocal styles that listeners either love or really struggle to get into. I fall into the latter category and I actually found his movement across vocal ranges quite disconcerting. But, to be fair, I also found myself a bit off balance with the way in which the band’s whole style of music constantly changes tempo and direction.

It may very well be that my take on The Creation of Pain is rather obtuse but I do believe that when a band presents itself as progressive as Hokum does, when listening to an album such as this the music is meant to unravel in layers which demonstrate that sense of evolution. I use the word evolution because I believe progressive music implies its style develops on what has been done before and refines that development. I can certainly hear an array of older styles of metal and rock in Hokum’s music but it is this refinement that I think is lacking. The Creation of Pain sounds restless and indecisive to me. Hokum’s style of metal demands your full attention when listening to it because their music is technical and layered but there is a lack of cohesion and flow to The Creation of Pain that blunts the overall impact for me.

At just short of three minutes into Dead End Into Doom I stopped, for the first time, sat up and heard an instrumental passage of music that was honest and pronounced with a beautiful ebb and flow of guitars and a tasteful backing of drums. And then, again, on the closing minute of Blacken there is some really inspired musicianship - a solid groovy bass line and waling blues-like guitars. The final track, Eroded, is the strongest in my opinion. It is more consistent in pace and underlined with really catchy riffs, matching drum beats and dynamic work on guitar.

I will end by saying what I touched on in the beginning – this was a difficult album to critique. The musicianship is very impressive and Hokum certainly do colour outside of the lines. There was simply something unsettling about The Creation of Pain as a composite whole and one should not only be able find an album’s strengths in its separate parts.