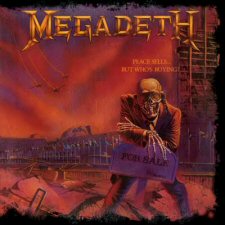 Thrash titans best gets a quarter century make over in style

Twenty-five years. Twenty-five fucking years! It amazes me that it’s been a quarter of a century since this iconic album hit the streets. But here’s the kicker. For me, and I’m sure many, many others, this album stands the test of time, and it does so very bloody well, too, I might add. Mega-main man Dave Mustaine probably did not realise at the time that he was crafting one of the most amazing thrash albums of all time. The fact that the label are giving it the super duper birthday treatment by delving into the vaults to unleash some never before heard material, and the fact that  the standard reissue is a 2 CD set whilst the deluxe is a 3LP and 5 CD affair, is testament to the unequivocal significance of this release.

Over the years, I’ve seen many metal heads swing from the nuts of Rust In Peace, touting it as the band’s finest hour. Don’t get me wrong. I love Rust In Peace – it’s a stunning album, polished yet still full of the energy that defined thrash metal in the 80s. BUT, it’s no Peace Sells. There. I said it. Even the inclusion of the unusual choice of a cover in the form of Willie Dixon’s I Ain’t Superstitious, Peace Sells stands head and shoulders above the rest as Megadeth’s finest release ever over the course of their coming up to 30 year existence. You cannot deny the power of cuts such as Wake Up Dead and the legendary title track, Peace Sells…But Who’s Buying? as well as The Conjuring and Devil’s Island. And don’t forget what is quite possibly one of the greatest album finales ever in My Last Words, and Peace Sells is one hell of a crushing album. But, you already know that, don’t you? Thankfully, the version here is remastered based on the original release, not the reissue in 2004 or whenever that was.

Accompanying the two disc set is a 13 track live album recorded live at the Phantasy Theatre, Cleveland, U.S.A. in 1987. This 55 minute set captures the group (who were then vocalist/lead guitarist Dave Mustaine, lead guitarist Chris Poland, bassist David Ellefson and drummer Gar Samuelson) at their most ferocious. With choice cuts from both Peace Sells and its predecessor, the band’s debut Killing Is My Business…And Business Is Good, each cut is seemingly faster than their studio equivalent, with Mustaine as always out to show just how much of a force to be reckoned with that Megadeth are, or were, in this case. The sound is live and raw but sounds decent for its age. Perhaps a little too much mids with the guitars, but hey, beggars can’t be choosers. It’s certainly great to have a concert of this vintage and era available like this.

Peace Sells…But Who’s Buying? is already a perfect 10 of an album. This 2 CD reissue reiterates that. If anything, the deluxe 3LP/5CD boxset would be an eleven without a doubt. It requires some serious coin but is well worth it for the absolute die hard fan of this album. I’ll be picking up one as soon as I can. But this reissue is fantastic – remastered from the original, bonus live show. No flaws here. A perfect album just got better. Buy or die!