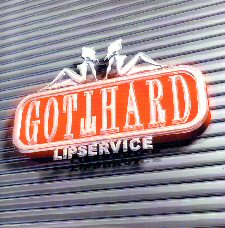 Rock out with your cock out!!

I'm sure that most of us at one stage or another listened to hard rock. It might have been the precursor to turning to the darker side of heavy metal (as it was for me), or it might be something you listen to to take a break from all things aggressive... or it could just be your own personal limit on how heavy you like your music. Regardless, hard rock has its place and Swiss rockers Gotthard are doing their damnedest to keep the fire alive within the genre with their eighth studio effort, Lipservice. In a move that surprised some, the quintet signed with Nuclear Blast - a label long associated with extreme metal more so than hard rock. Combine that with line-up changes, management changes and a self proclaimed move to a heavier direction and one could say there would have been a certain amount of pressure on the group to deliver the goods after such an illustrious career to date.

Off to a brisk start is the up tempo rocker All We Are and once again, founder Steve Lee's raspy voice is the true signature of this band's style. Dream On, which is driven by the essential element of any quality rock song - a good, solid riff - has some great chord progressions and melodies in that true rock'n'roll style. The first single, Lift 'U' Up has a classic singalong vibe along the lines of Slade or Joan Jett. Time to bust out the lighters and hold them proud to the token ballad Everything I Want in which Lee sounds almost like a cross between Cinderella's Tom Keifer and Def Leppard's Joe Elliot. Pinch harmonics and a simple, rock solid riff push Cupid Arrow along before the Def Leppard like track I Wonder slows things down a little. I'm Alive truly represents its title with a postive feel and vibe through out which, along with the opening couple of tracks, is one of the highlights of the release.

Sounding like the opening strains of Jeff Wayne's Forever Autumn (from the War Of The Worlds soundtrack; no not the Spielberg/Cruise 2005 remake either) is the second ballad for the album in I've Seen An Angel Cry which ends up reminding me of Bon Jovi's Never Say Goodbye (from Slippery When Wet) for the most part. Stay For The Night throws up a heavier, swinging vibe before the almost typical A.O.R. sounding Anytime Anywhere and Said & Done shift gears back to more straight forward rock. Sadly, the final three tracks The Other Side Of Me, Nothing Left At All and the closer And Then Goodbye leave the album finishing somewhat flat and almost uninspiring towards the very end. Gotthard have managed to suck some of the life and vibe out of the album with those three numbers.

Lipservice is a positive step towards their self proclaimed return to a heavier style akin to their earlier releases which should please fans for sure. The last three tracks are mostly unmemorable and flat and we can all be grateful for the fact that CD players have stop and skip buttons. That aside however, there's no reason why you shouldn't be giving the first eleven tracks a damn good spin because they are worth it.