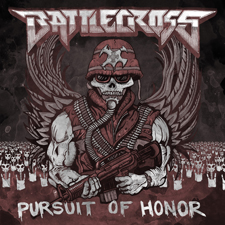 A breath of thrash air

Mainstream, commercial, unoriginal – there are several terms that could be thrown out there to generally describe how often the American metal music scene has continued to regurgitate the same old crap of late. The feeble whimper of so many new acts clinging to the swelling strand of trend has increasingly left me wondering how long it will take for things to come full circle and rejuvenate in the depth of the heavy metal mire.

And so, it was in my time spent listening to Pursuit of Honor, that I discovered it is in the likes of murky Detroit where such inspiration can be found. These boys don’t mess about – Kyle ‘Gumby’ Gunther (vocals), Tony Asta (guitar), Hiran Deraniyagala (guitar), Mike Kreger (drums) and Don Slater (bass) make up Battlecross; a dynamic and greased-up metal machine with no agenda or point to prove. They play the metal they love and they have done a damn fine job at bitch-slipping their own twist onto matters.

There is almost something Master of Puppets about the album on first impression. You have the album cover for starters, which has a similar aesthetic feel to it, and then you have the opening number, ‘Pursuit of Honor’, which is very reminiscent to the opening of ‘Battery’ before that flurry of guitars comes crashing in. The 38 second opener leads into ‘Push Pull Destroy’ which does not come initially across as hard-lined as the likes of ‘Battery’ but it does simmer with infectious rhythm and Gunther’s vocals drill right into your ear drums and seer away at your brain all before the song slows, the bass line picks up and the guitar solos give a little insight of what’s to come.

And it is within those first two tracks that Battlecross take their stand: firmly rooted in good old thrash metal but with a heavy dose of death metal also running through their style of “Blue Collar Thrash Metal”.

This is not to suggest that they take the foot off the metal-peddle in any way. Gunther opens ‘Kaleb’ with a desperate scream which is just so fitting as the song has this dramatic tone to it all the while hitting hard and unrelentingly. Gunther really does put in a powerful performance as does the rest of the band; as the quality of musicianship bursts through on every track. Slater is a real beauty on the bass with some stand-out moments on tracks like ‘Man of Stone’. The duo of Asta and Deraniyagala on guitar just keep churning out the riffs and demonstrate real precision and mastery while Kreger brings it all together with punch and machinegun-like execution. Each song on the album is almost as impressive as the last but, for me, Battlecross save the best for last with ‘Misery’. They are really showing off on this track and the flurry of a guitar solo on 3:30 just seals it for me. The final track on the album is actually the instrumental ‘Foreshadowing’ but a slower piece at less than two minutes and a fitting closer to thirty-odd minutes of inspiring thrash metal.

Pursuit of Honor just leaves me with such a warm and fuzzy feeling inside. There is something so nostalgic about how Battlecross stick to thrash metal roots and then, at the same time, something so refreshing about their interpretation of how metal has evolved and then how they mesh the two forces together to bring you this – The Pursuit of Honor.