The Obsession Will Kill Us All 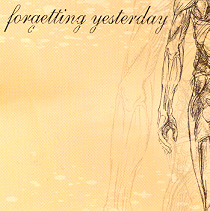 Forging the path for bigger things

I wasn't all that familiar with the label Below Par Distribution, and needless to say the cover to Forgetting Yesterday's debut E.P. didn't really give much away as to what I could expect when I hit the play button, but I have to say that the end results were quite unexpected and surprisingly good. Hailing from N.S.W.'s central coast (The Entrance region), the young five piece act Forgetting Yesterday (Who are vocalist Laurie Fouracre, guitarists Liam Shearer and Pete Cutrupi, bassist Ben Wright and drummer Nathan Pace) have only been together for little more than a year and a half (With their current line up), and in that time have shared the stages with acts such as Pacifier, The Butterfly Effect, Irrelevant, One Dollar Short, In The Grey, Horsell Common and Something With Numbers. In late 2004, the band ventured into Adelaide's Soundhouse Studios (With the idea of producing themselves), with their self funded independent five track E.P. The Obsession Will Kill Us All certainly living up to the group's own high expectations.

The opening track A Contrast In Controversy (Which will also feature on Helltrack Records' soon to be released second Action Against Cruelty Vol. 2 compilation later in the year) could be easily mislabelled as emo-rock by those who give the band a fleeting listen, but under closer inspection, you'll find that there's more to the band than what initially hits the ear. The (Huge) production, along with the song construction also reveal a slight Tool influence (Particularly in the dynamics between the instruments), while Fouracre's vocals are delivered with plenty of force, without resorting to screaming or drifting into whining complacency at any point.

Watch Your Tongue and Put Your Gun Away are solid rocking numbers, which rely on a more direct approach with simpler riff structures, while Fouracre's melody lines in The Illuminate Design Of Transparency combined with some subtle gang vocals take on a different tact, and show a slight change in direction. The final track It's In Our Sincerest Moments Secrets Become Confessions is by the E.P.'s most interesting offering, where atmospherics are pushed a little more towards the experimental, bordering on progressive rock in places (Especially within the guitar effects and chord progressions towards the tail end).

The Obsession Will Kill Us All is one interesting release, and one that will only help Forgetting Yesterday in getting their name out there beyond the independent scene. With an E.P. as strong as this, it's only a matter of time before their full-length debut album is consider the next big thing.