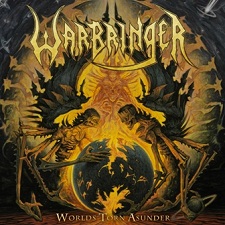 The resurgence of thrash metal over the last ten years has seen a whole host of acts emerge from the woodwork and help revitalise what was essentially a genre fading into obscurity. While some acts seem content to push the old school thrash sound into bold new territory (with varying degrees of success), there are some that simply want to bring back the vitality and tradition of what made thrash metal so important in the first place. And one such act that’s done just that is Newbury Park (California, U.S.) based outfit Warbringer.

Having released one E.P. (2006’s One By One, The Wicked Fall) and two full-length releases (2008’s War Without End and 2009’s Waking Into Nightmares) to huge critical acclaim, it’s not all that surprising to find that there’s plenty of hype surrounding the band’s all important third album Worlds Torn Asunder. And given Warbringer’s track record of delivering first class old school thrash in the past, it’s not all that strange to find that Warbringer have once again delivered another thrashing masterpiece in Worlds Torn Asunder.

Despite a change of guard within the band (vocalist John Kevill and guitarists John Laux and Adam Carroll have welcomed back original bassist Andy Laux, and recently recruited ex-In Misery/Hexen drummer Carlos Cruz into the band’s ranks), Worlds Torn Asunder doesn’t stray too far from the direction and sound that have worked well for Warbringer in the past, which is more than evident in the album’s opening track/single Living Weapon.

The Exodus influences that were evident on the band’s last album still linger within the riff work, but otherwise this is still very much the Warbringer we have come to know – meaning that there’s still plenty of speed, venomous Kreator-like vocals from Kevill, and riffs that put a lot of other so-called thrash bands to shame.

The single/first promotional video clip Shattered Like Glass is definitely a highlight with its catchy choruses, shedding lead work and huge riffed grooves, while on the more mid-paced efforts such as Wake Up... Destroy, Savagery and Treacherous Tongue, Warbringer have made a concerted effort to give the album a bit more variation from the flat out speed that dominated much of their past albums.

Both Echoes from the Void and Demonic Ecstasy (which is preceded by the instrumental piece Behind the Veils of Night) provide some new twists to the Warbringer formula of old with the band stretching out their compositions more for some truly memorable instrumental passages, while a track like the venomous Enemies of the State is essentially the kind of track you can depend upon Warbringer to serve up time and time again.

Warbringer haven’t yet released anything that falls below the bar they set with their debut, and their new album doesn’t disappoint in that respect. Worlds Torn Asunder is a truly stunning thrash masterpiece, and further proof that Warbringer are in a thrashing class of their own.