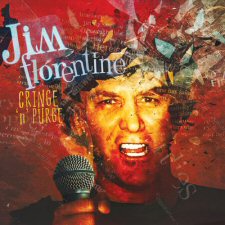 This one’s a gem!

I’m sure there are a lot of good stand up comedians out there these days and I’ll admit that they are not something that come across my desk very often as you can appreciate. But in the metal world, there are very few. I’m sure we all know of the legendary Sam Kinison and more recently Brian Posehn. Now with the increased popularity of VH1’s That Metal Show, comedians Don Jamieson and Jim Florentine have become known to those outside of the U.S. a bit more. Florentine though is already somewhat of a household name in the U.S already thanks to appearances on the Howard Stern Show and Crank Yankers plus his existing discography of Terrorizing Telemarketers releases amongst a couple of others. More recently, Florentine signed with long standing legendary label Metal Blade as did Jamieson. Now it’s Florentine’s turn to deliver his first stand up release for the label and right from the jump, it’s a laugh a minute.

It’s not unusual for comics to go the cheap, easy targets – sex, racial stereotypes, gay jokes. They all do it and to varying degrees of success. Some lean on these crutches too hard with very little story to carry the joke and they become tired and predictable very quickly. Sometimes, even childish. Others, have a good story behind these typical comedic targets, and when the story is sufficient and the joke dropped, it hits like an atom bomb and totally has the desired effect. Florentine’s Cringe ‘n’ Purge is just that from start to finish.

Right from the get-go, as soon as Florentine declares, “If you DVR the show Glee, then this is going to end bad for you,” it’s on. What follows is nine hilarious stories covering the silliness of superstitions, the obligatory gay jokes which include no shortage of audience references, stories of Florentine’s upbringing, being the opening act for Slayer and his views on hip hop and raising kids. Throughout the course of these 45 minutes, Florentine delivers some gut busting laughs at the expense of others, the audience and sometimes himself but at no point do the jokes fall into a rut. They stay lively and interesting as they twist and turn with the occasional throwback to a previous comment or story and most importantly, the routine flows smoothly.

Years ago, I had Sam Kinison’s Have You Seen Me Lately? on cassette and that was one hell of a standout comedy album. Brian Posehn’s releases have been fantastic as well. I said before that comedy albums from metal comedians are few and far between, but one thing’s for sure, metal references aside (and it’s not a dominating subject on Cringe ‘n’ Purge to begin with), Florentine’s debut for Metal Blade is pure comedy gold!