Reports from the Threshold of Death 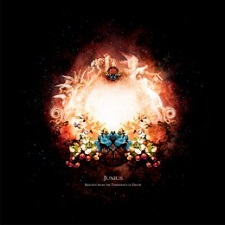 A confounding yet oddly captivating experience

It’s not often that an album confounds me as much as Reports from the Threshold of Death – the second release from Boston based Junius – has. For an album whose core is roughly an amalgamation of post rock, space rock and something along the lines of Neurosis or Isis you’d think it’d be a relatively easy task to form a solid opinion on the material rather quickly. Ordinarily that would be the case but there’s something about this album that has severely messed with my capacity for picking a position and sticking to it. After careful consideration, however, I believe the reason I’ve struggled so much with Reports is not because of the material on the album itself but more because of what I imagine the material on the album could have been. Allow me to explain.

To put things into context first, the vibe and the atmosphere on Reports is phenomenally good. It’s actually quite interesting that an album whose central theme is an exploration of near death experiences can sound so bright and uplifting while still keeping a toe convincingly in the maudlin pond of its subject matter. I see Reports as less of a doom tinged album bemoaning the inevitable end of life than as a reflective and contemplative narrative on the topic at hand. From this perspective Reports is an incredibly effective piece that places the listener squarely within the narrative while seemingly coaxing them into pondering the meaning of it all. This is what I love unequivocally about the album.

Where I believe Reports falters is through the music’s frequent inability to match the lofty goals of the band and their overarching concept. It is abundantly clear that the band put an incredible amount of work into creating a package that is all encompassing in its scope, from the intricate and rather delicate album artwork through to the conceptual themes and the careful crafting of an appropriate musical atmosphere to transmit it all to the listener but, ironically, as strong as the atmosphere is, a lack of variation and diversity in the song-writing renders what could otherwise have been a rich palette of thought-provoking conveyance into a slightly more monotone production line of songs that sound far too similar to each other to have the impact that they rightfully deserve to have.

It’s a little unfair of me to suggest that each of the ten tracks all sound completely identical, because that truly isn’t the case, but with little to no variation in the cadence of the tracks and with each of them being forged from extremely similar structural building blocks what initially seems like something inspired and breathtaking is quickly relegated back to a harsher reality once the curtains are drawn and the Wizard is revealed for all to see. None of this is to suggest that the material or even the structuring of the songs are bad things (they’re actually quite far from it) - my gripe solely lies with the lack of diversity across the disc. With such a predictable pattern the album ends up without the kind of spark necessary to elevate it above the level of pretty good to the level of truly excellent which is something that I think these guys are truly capable of doing.

It is this pining for what could have been versus what actually is that has left me feeling perplexed and oddly captivated at the same time. It is also what has ultimately jumbled my perception of what I’ve been listening to over the past couple of weeks while I tried to come to a conclusion as to what I actually feel about Reports from the Threshold of Death.

There is an incredible amount of talent amongst Junius’ ranks and it is so refreshing to see a band taking the time to cultivate their themes and concepts in an attempt to present a well rounded and thought-provoking package. Unfortunately, from my perspective, the band has fallen a tad short of meeting their goals this time around but they got close. Really close even. I can’t wait to see what they’re able to achieve next time around.