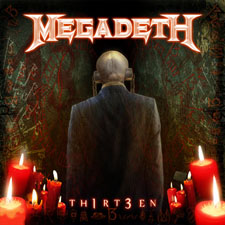 Brimming with a sense of revival

In 2009, the formidable thrash outfit that is Megadeth hit a massive return to form with the release of their twelfth studio album Endgame. Two years on and the aptly named Th1rt3en marks the thirteenth studio album to be released from a band that began writing themselves into the heavy metal history books with 1985’s Killing is my Business...and Business is Good!

It almost comes as no surprise that there has been yet another personnel change in Megadeth since the release of Endgame with original bassist David Ellefson replacing James LoMenzo. Dave Mustaine (vocals, guitar) has kept Chris Broderick (guitar) around, who made quite a first impression on Endgame, along with Shawn Drover (drums) who joined the band back in 2004. A music career spanning just over twenty-five years and thirteen studio albums is something quite special and Mustaine has been the driving force behind the Megadeth juggernaut as twenty other musicians have come and gone over that time. But, in spite of all the controversy over the years, Mustaine has been a real trooper - taking numerous blows on the chin and hitting back with prodigious authority with the release of Endgame. Whatever suspicions there were floating around that Megadeth were fading out; they blew those away with Endgame and now, in Th1rt3en, there is a real air of confidence about Mustaine and co. This album is the “culmination” of the work put into all thirteen records, says Mustaine. Th1rt3en is, in short, an immense album showing a band playing to their strengths and indeed drawing from over twenty-five years of majestic thrash metal experience.

Th1rt3en gets off to a very good start with ‘Sudden Death’. The first thing that springs to mind is that this is not an auditory thrash-ambush like the opener ‘Dialectic Chaos’ is on Endgame. Instead, ‘Sudden Death’ is the first indication of how Mustaine has gone even further than Endgame in meshing elements of their classic sound with an inspired sense of freshness and diversity. The song is tightly executed around a great balance between relentless, punchy riffs and a series of classic and intricate flurries on guitar. This is, generally speaking, the formula that permeates the whole of Th1rt3en but each song manages to surprise and impress in its own way.

The album delivers an astonishing amount of variability: lashings of old school thrash on songs like ‘Public Enemy No. 1’, ‘Never Dead’, ‘Fast Lane’ and ‘Wrecker’; infectious rhythm and melody on songs like ‘We the People’ and the awesome ‘New World Order’; riffs to sink your teeth into with ‘Whose Life (Is It Anyways?)’, ‘Deadly Nightshade’ and some extra attitude on ‘Guns, Drugs & Money’. Mustaine has never had the best of voices but he found a way to make it work for him and he did exactly that with this song. The diversity of Th1rt3en is its greatest strength and it speaks of a real honesty and personal reflection. And if there was one song on the album that embodies just this it is ‘Black Swan’. It is Megadeth of old but with a breath of life coursing through its every riff, lick and solo. Mustaine slows things down with ‘Millennium of the Blind’ and ‘13’. The former is a good track whereas ‘13’ delivers much more intensity with Mustaine really pouring himself over the lyrics as the song spills over and closes out the album in real style.

Th1rt3en is packed full of energy, speed, class and a typical Mustaine never-say-die attitude. There are some songs which are not as strong as the rest but, it remains an album that can be listened to over and over again. Megadeth continue their impressive return to form with Th1rt3en and Mustaine sends out a clear message that there’s still plenty left in the ol’ tank.