A Dramatic Turn of Events 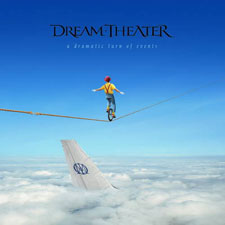 With such an illustrious career to date, a band like Dream Theater is bound to attract a significant amount of hype for any new studio album release. A Dramatic Turn of Events is no different but for the additional build-up in anticipation resulting from the departure of metal-minded protagonist and drummer Mike Portnoy. His departure is old news but there has been an understandably pronounced degree of intrigue in the air awaiting to see what Dream Theater were going to produce following Portnoy’s decision to leave the band to join Avenged Sevenfold. And what is the verdict? Dream Theater have embraced this change and, as a result, A Dramatic Turn of Events is a retrospective expression of the more melodic and instrumentally progressive style synonymous with the band’s unique sound developed in the earlier years.

Portnoy’s replacement is the now ex-Berklee College of Music professor, Mike Mangini, who joined Dream Theater in 2010 and quickly became part of the creative process with the band releasing this their eleventh studio album in 2011 – A Dramatic Turn of Events. On their official website, James LaBrie (vocals) is quoted as saying that this is the album they “had to make” and goes on to stress how it reflects the “originality” and “identity” they had achieved earlier on in their career. A Dramatic Turn of Events makes it quite clear that Dream Theater has used whatever significance Portnoy’s departure possesses in order to move forward and take the first step firmly embracing the idea of change and reflection. The collaboration of James LaBrie, John Petrucci (guitar), John Myung (bass), Jordan Rudess (keyboard) and Mike Mangini has produced an album built on the band’s roots of progressive melody and diverse song writing.

Indeed, there is plenty of melody to be found on this album with the inclusion of ballad-type songs like ‘This is the Life’, ‘Far from Heaven’ and ‘Beneath the Surface’. On the one hand, this is a good thing to the extent that fans will have a chance to sit back and appreciate Dream Theater stripping things bare in the hope of much needed renewal for future releases. And, on other hand, these three ballads are likely to be viewed as a real dampening to an otherwise very fine achievement in A Dramatic Turn of Events. For the purpose of dispensing with all the negatives in one go, Mangini’s rather drab performance on drums needs to be touched on. It is inevitable that comparisons will be drawn between him and Portnoy and, unfortunately, what you are left with is a performance that does not match the level of technical composition that Portnoy brought to Dream Theater.

Apart from the ballads and the drumming, A Dramatic Turn of Events is hugely impressive for songs like ‘On the Backs of Angels’, ‘Breaking All Illusions’ and ‘Lost Not Forgotten’ with mesmerising passages of interplay between Petrucci, Rudess and Myung. ‘Breaking All Illusions’ is the best track on the album. It is the longest song but does not feel long due to the way it constantly changes. LaBrie’s trademark vocals and the work on guitar by Petrucci are particularly special on this track. ‘Build Me Up, Break Me Down’ brings a good dose of heaviness infused with great rhythm and then a memorable chorus to smooth it all over. ‘Bridges in the Sky’ definitely goes for the more transcendent feel with the opening including a squawk of an eagle, a few choir notes and a deep trance-like wale (which sounds like someone burping actually) . But, save these two minutes or so, the song unfolds really nicely with a great balance between harder rock sounds, soft melody and energetic keyboard passages. ‘Outcry’, at just less than eleven and a half minutes, stands out for its intensity. It is emotional, frantic, brooding and declarative.

Ultimately, A Dramatic Turn of Events is not quite the complete package. However, Dream Theater has produced an album filled with dazzling flashes from earlier times and this is a direction many fans will be pleased to see them heading in.