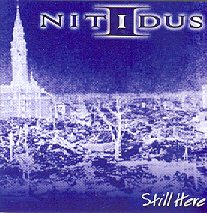 A taste of things to come

Melbourne based hard rock act Nitidus are back after two years away from the studio (Their last effort was 2003's A.S. It Is), and the difference is certainly noticeable on their latest four track E.P. Still Here. Although Nitidus consolidated their new look line up some time ago, Still Here is the first to show off the talents within the new look four-piece line up (Consisting of vocalist/rhythm guitarist Patrick 'PC' Clemenger, guitarist/backing vocalist Ash Fyfe, bassist/backing vocalist Marki Miklic and drummer/backing vocalist Kristian 'Doctor K' Grondman), and the difference is certainly immediate within the opening track Red Morning. The pairing up of the guitarists adds plenty of weight in the heavy stakes of Red Morning, while Grondman manages to inject plenty of hard hitting drum sounds that underpin throughout, but it's Clemenger who's really progressed since Nitidus' last outing. While bearing a striking resemblance to Edward Kowalczyk (The vocalist for Live) in places, Clemenger's performance has strengthened greatly in the last two years, with his range far greater depth, and as such makes it stand as one of Nitidus' stronger selling points.

Hurt is another first class slab of heavy rock with a little more experimentation in atmospherics (Some nice contrasting backing vocals, distorted lead efforts and pace changes that allow for some great build ups), while the gentle Outta Place takes the lead set by the previous track, and pushes it further at opposite ends (Helping out is producer/mixer Adrian Hannan with some subtle touches of cello in places). The final track Standing Here is again another driving number in the vein of Hurt (Plenty of tempo changes and a memorable chorus that really stands out), before bringing things to a close.

Nitidus have really gelled as a solid unit over the last two years of playing live, and it certainly shows on the four tracks featured on Still Here. If you're after some quality melodic hard rock of the local (Independent) kind, then you can't go past Nitidus' Still Here. I can only hope that when it comes time for their next effort, it's a longer than a teasing four tracks!