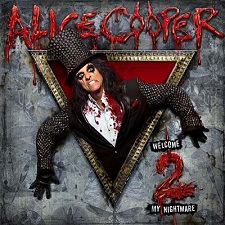 It’s no classic, but a lot better than expected

When Alice Cooper first mentioned the idea of putting to together an official sequel to his classic WelcometTo My Nightmare album from 1975, I wasn’t exactly over enthused with the move. The idea of a producing a follow up to such an iconic classic after so many years was always going to be a challenge, with the worst case scenario being that his new album would diminish and tarnish the reputation and status of the original.

But as further news filtered out about Welcome 2 My Nightmare, things did seem a little more promising. Bob Ezrin, who produced many of Cooper’s classic releases in the past (including Welcome to My Nightmare original sequel Goes to Hell in 1976, and who last worked with Cooper on 1983’s rather confused and fascinating DaDa) was brought in to oversee the project, and the vast array of guest artists scheduled to appear on the album was admittedly looking rather impressive. But despite the big names and the promise of a return to the nightmarish conceptual storyline that Cooper began some thirty-six years earlier, I didn’t really hold my hopes up for anything that would rival the original in terms of classic status. In fact, if I were honest, I was expecting a real disappointment. Perhaps it had a lot to do with my lowered expectations, but I must admit that Welcome 2 My Nightmare is actually a much stronger and more inspired release than I thought it would ever be.

Welcome 2 My Nightmare opens up in an unexpected manner, with the slower paced I Am Made of You initially starting out with a piano part lifted from Steven and Cooper manipulating his voice to give it an effect similar to auto-tune via vocoder. The song itself has a definite classic Cooper/Welcome to My Nightmare feel, and the guitar contributions from Tommy Henriksen really stand out.

The follow-up track Caffeine (the album’s second single) is a hard rocker that mines similar ground Cooper presented listeners on his last few albums (the classic 70’s hard rock sound that was evident on 2003’s The Eyes of Alice Cooper and 2005’s Dirty Diamonds), but is somewhat of a letdown as it essentially sounds a little too reminiscent of Can’t Sleep, Clowns Will Eat Me (The bonus track from 2000’s Brutal Planet).

The brief segue, The Nightmare Returns, while a nice tribute to the original Welcome to My Nightmare, seems a little lost at this point of the album (as an opener, it would have worked), but Cooper does get things back on track with the totally rocking A Runaway Train, which depicts Cooper travelling to Hell on a train. Musically, the song is given a classic workout with the original Alice Cooper group (guitarist Michael Bruce, bassist Dennis Dunaway and drummer Neal Smith) helping to deliver the rocking soundtrack, while country star Vince Gill tops it all off with a killer solo.

Cooper continues to produce some real magic with his Tom Waits inspired Last Man on Earth (this new album’s take on Some Folks), which flows through to the classic rock The Congregation. It’s these two tracks where Cooper’s humour and wit really shines, and the conceptual aspect of the storyline really flows well.

Unfortunately, I’ll Bite Your Face Off (a nod to The Rolling Stones, and featuring the original Cooper group and backing vocals from Rob Zombie) and Ghouls Gone Wild are throwaway numbers with their uninspired choruses, while the pseudo disco effort Disco Bloodbath Boogie Fever (featuring a solo from John 5) just sounds annoying and out of place, and perhaps would have been better served up as a bonus track/b-side.

Cooper has rarely let down with his ballads, and Something to Remember Me By is a classic Cooper/Wagner tune that could have easily found a place on either Welcome To My Nightmare or Goes to Hell. In stark contrast, the dark, humourless and menacing When Hell Comes Home is another album highlight, with Ezrin providing the sinister piano work and the original Cooper band the haunting/classic backdrop.

The much talked about collaboration between singer/songwriter Kesha (A.K.A. Ke$ha) and Cooper on What Baby Wants is actually not as bad as it sounds on paper, even if it is a little too pop based for the most part (I say that because while Steve Hunter is playing guitar, it’s not too over the top).

Finishing up the album is the fantastic I Gotta Get Outta Here, which not unlike most Cooper albums, is a bombastic and overblown finale with a cool twist.

The official closer is The Underture which is an orchestral overture that runs through instrumental takes on tracks from both Welcome to My Nightmare and Welcome 2 My Nightmare, while interesting, is hardly an essential piece to the album’s overall musical concept.

Although preparing myself for a huge letdown, I actually found a lot more to enjoy on Welcome 2 My Nightmare than I thought I originally would.

The album does have some filler efforts, and the story doesn’t flow quite in the same way as some other concept efforts from Cooper (Goes to Hell, 1978’s From the Inside and 1994’s The Last Temptation are better examples of Cooper’s more accomplished conceptual efforts), but as an album, Welcome 2 My Nightmare is a strong effort, and proof that Cooper still has what it takes to entertain.