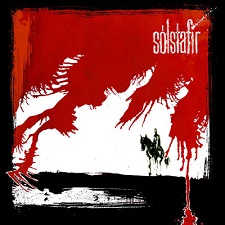 Another surprise from Solstafir

Ever since 2005, Iceland based Solstafir has been stirring up interest among their fans. The band originally performed the typical Black/Viking Metal style that presented a cold atmosphere, decent rhythms, and twisted vocals mixed with cleaner, more tolerable vocals, but it didn't really make the cut among all the other bands like Enslaved or Borknagar who were progressing out of the usual Black Metal tinged route and aiming for a more eclectic sound. So, in 2005, Solstafir made a huge change from Black Metal to Progressive/Psychedelic Rock while retaining their Black Metal roots. Despite the music being a lot more toned down and not as chaotic, the heavy atmosphere created by distortion along with certain riffs here and there hint at traces of what the band once was before. The band also expanded their song-writing capabilities, including more epic tracks and a longer album; their last release of 'Kold' was over an hour long and included numerous tracks that showed much lengthier structure and variation as opposed to the simple, shorter ones that populated their previous albums. Now, still continuing the same Progressive Rock route, Solstafir unleash another album that is similar to 'Kold’, but also very different in its own way.

'Svartir Sandar' is a two part journey that could have been combined into one- it still clocks past an hour. However, Solstafir felt it might be best to break things up a bit rather than fall back into the repetitive formula. One thing that 'Svartir...' does really well is focus on the Psychedelic and Atmospheric Rock elements of the music- to compare it to their first album back in 2002 would be like hearing two different bands. The opening track on disc one, "Ljós í Stormi" is slow and distorted, sounding almost like a Doom Metal track, though when things pick up the chaotic Black Metal formula is somewhat there. About four minutes into the track the vocals come in- faded due to the distortion and a bit rough- but certainly Rock oriented, and the song just takes off from there. Some parts are heavier, raging chugging like one would hear in an Enslaved and other track are just quiet, slow, and echoing like someone might hear in Pink Floyd. Being an epic eleven minutes, Solstafir has to do quite a bit to keep fans interested. The other tracks throughout the disc aren't as long; in fact many of them may seem like some of the shortest work the band has done in a while. Many like "Fjara" and "Sjúki Skugginn" are quiet, save for a few moments of heavy crashing before toning down again with the vocals crooning away; they sound a lot clearer this way. "Kukl" is almost a dream/ trance track with a synth playing over the vocals, which sound even hollower and echoing than before. It's a different kind of atmosphere for fans to enjoy who are not used to Solstafir's change.

The second disc on the album is a bit more Rock oriented with a clearer sound and more of a focus on the rhythms. "Draumfari" and "Djákninn" remove a bit of the hazing distortion that made the earlier tracks like such a Sludge Metal haze and as a result the music is a lot clearer, perhaps touching a bit on Amorphis' Far from the Sun Days. It is no way close to anything mainstream Rock, but the Viking Metal atmosphere is almost all gone, definitely showing that Solstafir are still moving without stopping for any comfortable moments. Other parts of this disc delve into the ambient side of the band like on "Stinningskaldi" which is the shortest piece ever done by Solstafir and just includes some recorded vocals over plinks of guitars before leading into "Stormfari" which continues with the atmosphere until leading into a heavier Rock formation. Ultimately, both these discs are a good selection of what Solstafir has to offer as they show they've come a long way since their debut. The music is stronger and more diverse. For those who haven't heard them since their debut, or who think that all 'Viking Metal' is just Black Metal with more melodies involved, Solstafir will come as a huge surprise. For those who have been following the group for the past few albums, 'Svartir...' is the next step from 'Kold'. It may not be as epic or come together as cohesively (the band also opted to not include any English tracks this time) but for such an epic piece splitting into two discs may give fans more time to let the music sink in, rather than get washed away in it all together.